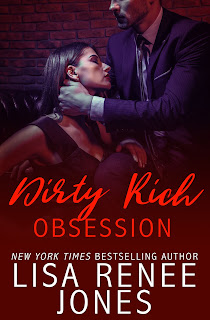 Bestselling author Lisa Renee Jones takes fans and readers back into the richly and deliciously dirty world of her Dirty Rich series with the third novel, Dirty Rich Obsession. This enemies-to-lovers romance is every bit as intriguing as the first two in the series--Dirty Rich One Night Stand and Dirty Rich Cinderella Story, respectively--ensuring that the series continues to meet the lofty expectations I keep setting for it each and every time a new addition to it is announced and its imminent arrival. Although this is part of an ongoing series, it can very much be read and enjoyed as a standalone, just like the novels before it. But hey, go ahead and read those other books too!

Reid Maxwell is a man who like to be in control. Having a firm grip on the reins of any situation is part of what makes him one of the most in-demand lawyers around. He likes to win in anything and everything, and he sure as hell doesn't like being told no. With Carrie West, though, he may have to get used to it. She's none too pleased that his family's firm has taken over her family's business. All he was doing was collecting on a debt between the Maxwells and the Wests--a debt that Carrie has no idea about. So while it would have been simple enough for Reid to place his stamp on a business that's legally his, his obsession with placing his claim on Carrie could derail plans.

As much as I like friends-to-lovers romances, there's something to be said about a truly well-written enemies-to-lovers story. This book had the required tension and it had it in spades. I loved that Carrie was more than willing to go toe to toe with Reid, and these two certainly kept things highly entertaining whenever they were together. Now, remember that Carrie has no clue that there's a debt that started this whole takeover thing, and that revelation was, in itself, one of the highlights of this story, especially since there was every possibility it would destroy what Reid and Carrie were building together. Lisa Renee Jones does not disappoint with Dirty Rich Obsession. Five stars. ♥