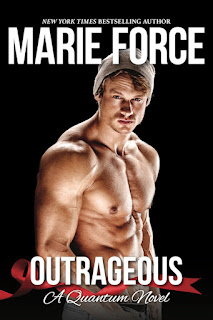 Bestselling author Marie Force returns to Quantum, the erotic romance series that she launched under the pen name M.S. Force with the seventh novel, Outrageous. This is the story of thirty-four-year-old Emmett Burke, an entertainment and corporate lawyer working for Quantum Productions, owned by his closest friends, and twenty-four-year-old Leah Holt, personal assistant to Marlowe Sloane. Leah's had a thing for Emmett from the moment she saw him, and she's done anything and everything possible to get close enough to him without being overly inappropriate. She's definitely not being subtle considering Emmett is very much aware of her flirtations and machinations. He knows what she wants: HIM. But there's no way Emmett can allow anything to happen between them, and the ten-year age difference is just the tip of the iceberg of reasons why they can't. As flirty as Leah may be, Emmett's pretty sure the young woman is as vanilla as it gets, and vanilla simply isn't his favorite flavor. But when he can no longer deny her what she wants, will it only be a one-time thing or could this be something more?

There's more humor to be found in this latest Quantum novel, which was a pleasant surprise, but there is still a fair bit of angst and drama in Emmett and Leah's story. The title seems rather apt for the book, especially since Leah had no qualms doing whatever she had to in order to get Emmett to take a look at her a bit more closely while finding some way to break his ironclad grip on his desires. The sex, as always, is hot, but then I don't really expect anything less given that I've read the first six books and know what the men and women of Quantum are wont to get into inside the bedroom, or well, wherever the mood hits them. Of course, that doesn't mean that all you get is sex. There's a story to be told, and Emmett's in particular was kind of heartrending. He comes off as this extremely put-together, all-business type of man, but there's a darkness in his past that he keeps separate from his everyday life now, but not for any sort of cold or nefarious motive. Overall, Outrageous was par for the course when it comes this series, and having the Quantum gang around lends this an appreciated fun and familiar feel as well. Four stars. ♥