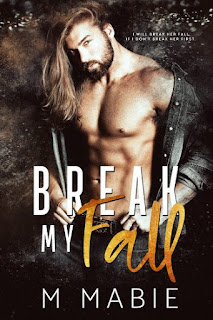 I have three of M. Mabie's previous releases on my Kindle bookshelf--and they've been there two or three years or so--but Break My Fall is my first read from her. This is the first in her brand new Breaking series, and it's basically about a man named Abraham Hathaway who turned his back on the cult that his father was pastor of, walking away from his family and the shackles of the Legacy at only sixteen. Twelve years later, Abe has created a quiet but fulfilling life for himself in Connecticut, but the death of his younger brother has him returning to the town of Lancaster for the first time since he left. His only intention was to bid his brother goodbye, but when he meets Jacob's widow, he's struck by how aware he is of Myra Fox Hathaway. When he worries about what his father's cult may have in store for Myra, Abe offers to not only speak on her behalf but to take her as his wife. All he wanted was to protect her and give her a choice in her future--to be free to explore the possibilities a young woman like her has beyond the boundaries of Lancaster and outside of the The Banded Church of God. However, will Abe be able to stop from giving in to the need surging through him to explore his brother's widow who is now Abe's wife?

The blurb for this series starter definitely caught my attention. I love when a book strives to offer something beyond the norm, and while I have read romance novels involving cults before, with M. Mabie being a new-to-me author, I considered this a promising introduction to her writing. Abe is quiet but intense, and that intensity was communicated clearly when he dove in headfirst to trying to protect his sister-in-law from whatever machinations he knew awaited her at the hands of Abe's father--aka the Great Pastor of the little cult he had going in the town of Lancaster--and the rest of the elders and men who thought they knew best for the young widow of one of their own. I get Abe's being drawn to Myra and his desire to for her as a whole, but for him to allow himself to become involved with the very thing he stayed away from for twelve years? That just seemed...weird. Maybe there was a baser part of him that wanted her, and maybe he really was a nice guy, but it didn't make a whole lot of sense. But there was something about the story that still had me going, and it really was an intriguing read. That ending though... I'm okay that it was a cliffhanger but the transition was so abrupt and out of left field. I'm going to have to give Break My Fall four stars, but I'll still be looking forward to reading the next book in Mabie's Breaking trilogy. ♥