Review: The Earl of London by Louise Bay (Royals #5) 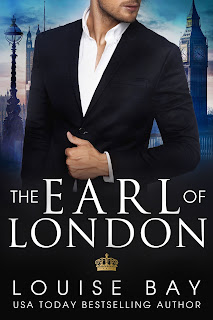 The Earl of London is the fifth in bestselling author Louise Bay's Royals collection, but I can safely say that this absolutely works as a standalone, given that I have yet to read the first four standalones in the collection--something that I plan on rectifying as soon as humanly possible. This enemies-to-lovers romance was a fun read, a great deal of it thanks to the two main characters who kept each other on their toes while making me--the reader--cheer them on to their happy ending. This had a lighthearted feel to it, but it never skimped on the romance or sex, and it had an entertaining story about two people who seemed to be on opposite ends find their way to love.

Going after what he wants is part of what's made thirty-two-year-old Logan Steele a success in the world of business, and when he learns that Badsley House--his grandmother's original home--was up for sale, he goes after it, no questions asked. Not only does he want his beloved grandmother to call the place home again, but he hopes to spend time there on the weekends, finding the village of Woolton both beautiful and relaxing. His neighbor over at Woolton Hall is certainly easy on the eyes but she's not as easy on his ego. Twenty-eight-year-old Darcy Westbury may have thought Logan handsome the first few times they met, but once she learns of his plans for Badsley House, she has no qualms putting him in his place, and one newspaper article definitely has her seeing him as a villain. What would it take for Logan to prove Darcy wrong? It's a battle of wills between the Earl and his Lady.

I had a lot of fun reading this book. There's no denying that Logan was very much a man who could land a profitable deal just as easily as he could any woman who caught his fancy, but there was a lot more to him than that. Darcy had made up her mind about him after reading one article, but I liked that Logan made her question her original assessment of him not by telling her that he was different from the man profiled in the papers but by showing her who he really was. Neither of them were perfect, and thankfully so because that would have made them far too boring for my taste. Louise Bay did a fab job giving readers multi-layered characters within an uncomplicated story that wasn't riddled with more angst or drama than necessary. 4.5 stars for The Earl of London. ♥

Purchase The Earl of London on Amazon | B&N | iBooks | Kobo.