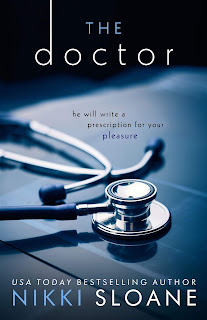 A devilishly dirty May-December romance with an additional touch of the forbidden to it was just what the doctor ordered and bestselling author Nikki Sloane more than fills your prescription with her newest release and the first in her Nashville Neighborhood series. The Doctor--which marks my second read from Sloane after Rivalry, a book that happened to be one of my favorite reads from last year--is the story of nineteen-year-old college student Cassidy Shepard and forty-year-old trauma surgeon Gregory Lowe. Cassidy is nearing the end of her rope with her boyfriend. Preston barely makes the effort to be the kind of guy that Cassidy deserves as he takes for granted the their three-year relationship and the friendship they've had for even longer. But there are certain things that must come to an end, no matter how painful it may be. Cassidy expects Preston's anger and she knows that there'll be hurt and sadness and resentment in the wake of their break-up, but what she doesn't expect is to find comfort and solace to come in the form of her now-ex-boyfriend's father, Greg. Could he be the cure to Cassidy's broken heart?

Who doesn't love stories that are downright dirty but also happen to have a story to tell and its own brand of romance? Many consider the whole age-gap romance thing taboo enough but to that the fact that Greg is Preston's father and that he's been fantasizing about his son's girlfriend--and Cassidy him--well, it definitely makes for one hell of an entertaining read. There was no putting my tablet down because as much as lust was what got Cassidy and Greg together, I was curious to see how everything would play out and how these two would eventually fall in love and get their happily-ever-after. The book could have gone in several directions, but I liked that the author chose to take the road that was paved with challenges for our main characters. Sure, having Cassidy and Preston get back together was possible since anything can happen in the world of romantic fiction, but the intrigue behind a May-December affair becoming more was more appealing. Nikki Sloane did NOT disappoint. The Doctor is in, and I prescribe a few hours reading about him and his barely twenty-year-old girlfriend. Five stars. ♥