Review: The Truth About Lies by Aly Martinez (Truth #1) 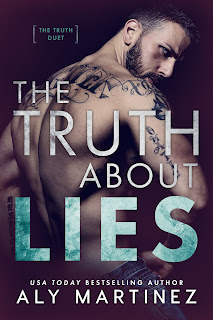 This smile was different.

It was the kind of smile that could have shredded the darkest soul.

And I knew—because it was the exact moment I felt the first slice through mine.

I so love when I start off my week with a stellar read, and Aly Martinez's new book was exactly that! The Truth About Lies is book one in the author's Truth duet and it was everything I could have hoped it would be and more. Martinez is a go-to author for me and for good reason. She knows how to hook her readers from the get-go and then reel them in, ensuring that they stay for the long haul. This book had a dark, somber feel to it with bursts of light among the interactions of the main characters and them with those who are nearest and dearest to them, who were a very select few but they were made to count. Does it have a cliffhanger? Yes, it does, but the wait is less than a month's time, and trust me, you're going to want to read this book either right now or closer to the release of book two because you don't want to be one of the very few who have no clue about its awesomeness.

The Truth About Lies has a harrowing prologue, but it sets the rest of the book rather perfectly. We're quickly introduced to the main players in this story--Cora Guerrero, a twenty-nine-year-old who is a den mother of sorts to about thirty prostitutes all living in the same building owned the men who own them in return, and Penn Walker, a thirty-seven-year-old who, along with his younger "brother", becomes the new superintendents of a sort for the building. From the moment they meet, there's a spark of something between Cora and Penn--a "something" that neither one of them has experienced...not since they lost their respective spouses. Losing their partners isn't the only thing that ties Cora and Penn together--their attraction to one another and their genuine kind-heartedness and concern for others are shared things. But when lies are the foundation of a relationship, everything is bound to come tumbling down, and when all's left is the rubble, will there be anything left to put back together once again?

Aly Martinez's stories are always so character-driven that it's almost impossible not to become attached to her characters! I found myself emotionally invested, not just in Cora and Penn's story but in what could be waiting for Drew Walker and the girls who were closest to Cora, namely, River and Savannah. These guys were living less than stellar lives, yet I loved how Cora still put the other girls first, even risking her own safety and security just to make sure that they were protected. Then Penn comes along and while it's clear he wants her to realize that she's no longer alone in trying to help others, there's something about his being there that pings as...suspicious. And well, that's all I'm going to say about that because, hello, you'll need to read the book in order to see what was really going on. Remember, this does end in a cliffhanger, and it was one that left me saying "I knew it!" right before I wanted to fling my tablet down because I'm now going to have to wait before I can get the answers that I need! Sigh. But I've got a feeling that it'll be so worth the wait, and that's no lie. Five-plus stars go to The Truth About Lies. ♥

Purchase The Truth About Lies on Amazon.