Review: Someone I Used to Know by Patty Blount 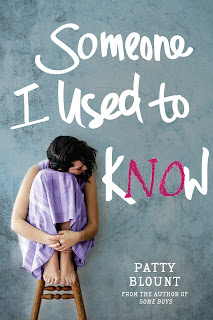 “Go home tonight and ask the women you know—moms, sisters, friends. Ask them if they have a Me Too or Yes All Women story. I guarantee they will. In fact, they'll have more than one. Because every day, while we're busy pretending it's not happening, the women we know are facing questionable, creepy, and outright threatening behavior from guys. What I'm saying is it doesn't matter if you're not that guy. What matters is we're the guys who keep ignoring this crappy behavior because we're afraid we'll look like wusses.”

Patty Blount writes young adult (YA) stories that go beyond the usual first love slash first kiss sort that lined my shelves as a teenager. Someone I Used to Know is her latest novel and it packs more than a punch, giving you things to ponder on while you're reading it and long after you've turned off or set aside your reading tablet. This is a loose spin-off of her much lauded Some Boys novel from a few years back. Not having read the aforementioned years-old release, I can safely say that you can still very much appreciate the story in this new book but I confess that my curiosity was quite piqued, especially after checking out the mostly positive reviews that many other readers and publications have given it. In short, that book has now earned a place on my to-be read list while this new book has turned out to be one of the more heartrending and thought-provoking YA reads I have encountered over the years.

When Ashley Lawrence was fourteen, she knew that things were going to change. After all, she was a freshman in high school and there were going to be all-new experiences just waiting for her over the next four years. She was right, but she never fathomed that all it would take was one night for her world to be knocked off its axis, never to right itself the way it was before...that night. Ashley was raped by a boy who happened to be her brother's teammate. His sentence was laughable at best, but Ashley wasn't laughing, not when the victim was being made to look as if she were the one who should get expelled from school instead of the football star. Gone is the girl full of hope and promise. She's been replaced by this Ashley--the one whose dreams have become nightmares. That one night affected the lives of Ashley and her family, especially her relationship with her older brother, Derek. Two years ago, Derek and Ashley were already not as close as they used to be, but the rape shattered whatever little was left. When Derek returns home from college for Thanksgiving, will healing begin or do the scars run too deep?

There's no sugarcoating that goes on here. What the author gives her readers is an often harsh but all too real look at what rape culture is like. There's a whole lot of blame that goes on, and unfortunately, the victim isn't spared. All you have to do is turn on the news or peruse a newspaper to see that this is the reality that our world lives in. Ashley's story is a reminder that even with all the attention movements like #MeToo and those like it have made in the past few years, so much work still needs to be done. When rape, misogyny, assault, harassment, and so on happen, it doesn't just affect the woman who survives to tell her tale--it affects those closest to her as well. One of the most intriguing things about Patty Blount's new book is that it isn't just told from Ashley's perspective but from Derek's as well. We also get a better idea of what other family members and friends think when they finally speak up. Yes, this book isn't an easy read, but it's one worth reading because this is the world that we live in, whether we want to openly admit it or not. Maybe it'll inspire someone to speak up and speak out; maybe it'll inspire someone to look a little deeper at the stories of real people who have lent their own voices because of their experiences. Someone I Used to Know is one of the most notable YA books I've read in a long time. Five-plus stars. ♥

Purchase Someone I Used to Know on Amazon | B&N | iBooks | Kobo.