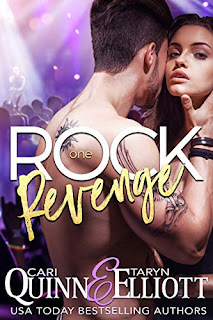 Two things: I loved Cari Quinn and Taryn Elliott's Lost in Oblivion series, and I've yet to read their Found in Oblivion books, the latter being the spin-off of the former. I plan on rectifying that second item once my required reading list lessens this year. All that being said, this writing duo's newest release can be considered a spin-off of sorts as well of their Lost in Oblivion series given that we've got Simon Kagan, lead singer of the mega band that is Oblivion, back where he belongs--up front with a mic in his hands, his band mates around him, and his wife Margo by his side. But if you think this is another book about Oblivion, think again because Quinn and Elliott, who know a thing or ten about writing fantastically addictive rock romance series, are adding a few twists and an intriguing anti-hero.

Oblivion is doing better than ever, but frontman Simon Kagan is feeling a wee bit lost. He can't pinpoint what it is that make him feel as if something's missing. He's got his nearest and deartest surrounding him--the rest of band who truly are his family and the woman that owns him, body, mind, heart, and soul. They're in the middle of packing stadiums, which is all par for the course, when something suddenly snags Simon's attention. There's someone who looks uncannily like him and there's no denying the guy can more than carry a tune. His name? Ian Kagan and he claims that he doesn't merely look and sound like Simon but he's actually Simon's brother. Simon needs to figure out what's really going on, but then there's Margo who seems to be keeping a secret from him too.

Rock Revenge is a great opening salvo to the new series by the same name from Quinn and Elliott. Having all those familiar characters that fans and readers met and fell in love with before is like the gift that keeps on giving. The introduction of Ian definitely sets things up rather nicely for the books to follow. There's no denying that Ian thinks the world owes him something, but I'm curious to see just how the guy plans on proving that he deserves it, especially given that it looks like nothing's going to simply be handed over to him because of his last name and connection to one of the biggest stars in music. This novella can be read as a standalone, but if you've never read the Lost in Oblivion series, I recommend you check it out. Rock Revenge gets 4.5 stars. Bring on Rock Redemption! ♥