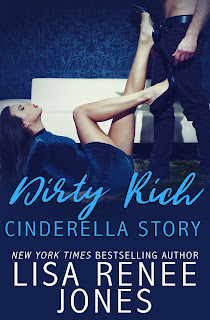 Lori Havens's dream of becoming a lawyer had to be put on hold when her mother fell ill. Leaving law school just a few months shy of graduation was a necessity, and while her life was once about legalese and law books, now she's juggling three jobs in order to make sure that their bills are paid and that she and her mother are able to keep their heads above water. When she meets a stranger outside of one of her employers' apartment building, Lori decides to do something out of the norm for her: she sleeps with the hot, sexy, and obviously man from out of town. Come morning, though, she leaves, refusing to even make the man suspect that she's some clingy woman after him for his wealth. But Lori never forgets her stranger...and he does not forget Lori. So when months pass and she lands an internship at a newly merged law firm, Lori is shocked to come face to face with her one-night stand: Cole Brooks--her new boss. Cole makes it very clear that he has no intention of letting his Cinderella run away from him again, but can Lori entrust her heart with her all too charming prince?

Dirty Rich Cinderella Story is the second standalone novel in Lisa Renee Jones's Dirty Rich series, although the main characters from Dirty Rich One Night Stand, Cat and Reese Summer, are supporting characters here, with Cat being Lori's boss first and then Reese being Cole's law partner. The Cinderella-esque aspect of this book has to do with Lori leaving before Cole can get any sort of personal information out of her after their hook-up. That doesn't mean, however, that Lori is some damsel in distress even though her life is not how she envisioned it when she was still an ambitious law student. She isn't the easiest female main character to like, what with her making assumptions about Cole and being a wee bit more abrasive than I would have preferred. And even though I'm sure it would tick Lori off, Cole really did save the day. He was such a great male main character and I liked that he wasn't this overly domineering nor aggressive guy who thought he owned the universe. Still, Dirty Rich Cinderella Story was both dirty and rich in terms of romance, and it garners four stars. ♥