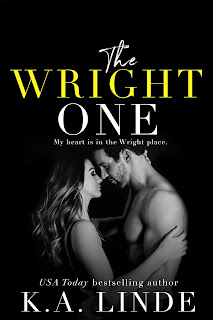 David was the one who had helped me all those months I was dead inside. All those times I needed a sitter for Jason, just to escape. All those times I heard ghosts in my house and voices that woke me in the night, expecting Maverick, his absence overwhelming me.

David had been a beacon in the darkness.

Can I just say how much I love the fact that I was able to get my hands on an advanced reader copy of The Wright One? After all, that cliffhanger of an ending had me absolutely gobsmacked, and I desperately needed answers to every single pressing question that popped into my head after the accidental bombshell revelation involving David Calloway. What was revealed is something I'm going to have to keep under wraps, which basically means one thing: those of you who haven't read the first book will need to do so if you want to find out what it is. Sure, you could go ahead and jump into this second book, but you'll be losing a whole lot of back story, especially when it comes to how David and Sutton Wright went from friends to lovers then nothing.

Just when Sutton thought she had found love again--a light in the darkness that had enveloped each and every day since her husband Maverick died, all it took was one secret--one name--to destroy everything that she and David had built over the time they had been in each other's lives. He was considered part of the Wright family, and it was an honor and a privilege that he took to heart, but now, he had lost his footing, no longer sure if he still had any place left within the personal and professional lives he had created for himself. A lie of omission is, in Sutton's eyes, still a lie, but David has his reasons for not immediately divulging his past. Will David be able to convince Sutton that their love is true and will Sutton see that David is the right one before it's too late?

Ah, how my heart squeezed in empathy for both Sutton and David in this conclusion to the Wright Love duet. There were moments that I was a bit frustrated, but then I also understood why Sutton was as upset as she was, and why David later on made the decision that he felt was best for all parties concerned. I was thrilled that readers finally get to know much more about David in this second book, and it's clear that while there are parts of his past that he may not have been proud of, he has always been a good man. The rest of the Wright siblings are present and accounted for as well, and I feel that this duet was a more than apt end to this well-loved series. Perhaps we'll get the Wright cousins in the future? Fingers crossed! Five-plus stars for The Wright One. ♥

Read my reviews for the Wright Love series:

The Wright Love (book one) - five-plus stars - My Review

Purchase The Wright One on Amazon | B&N | iBooks | Kobo.