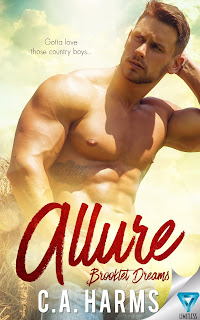 C.A. Harms popular Southern Boys series has a spin-off! Brooklet Dreams introduces readers to the next generation, and the series starter, titled Allure, is about twenty-one Rhett Jackson, son of Kori and stepson of Reed Jackson in the first Southern Boys book, Forgiving Reed. Rhett once thought his future would be with his first love, but then she and her family moved from their small hometown to the bustling city of Seattle, before they even graduated from high school. Four and a half years later, Rhett's life has been about his family, friends, and college, but he hasn't truly ever let go of the hope that his ex-girlfriend would find her way back to their town so they can restart working towards their dreams of being together. But a little dose of reality has Rhett realizing it was time for him to move on, and he finally notices the quiet girl who's always been in his periphery for the past few years--Allison Jo. His relationship with AJ flourishes and Rhett insists all he sees is her, but when his ex reappears, will Rhett be able to resist his past and give in to the allure of a future with AJ?

When it comes to C.A. Harms's stories, you've always got a guaranteed happy ending. Rhett was a young man who was holding on to his past far longer than he should have and that made it difficult for him to see what was right in front of him for a good, long while now--AJ. There was very little angst in this love story, and yes, that's even with Rhett's first love returning to their hometown. It's a sweet love story, one that does venture into the sugary-sweet end of the spectrum, and both Rhett and AJ are likable main characters who have very little negative qualities to them. They're a tad immature and impulsive, but then they're also in their very early twenties, so I totally got why they acted the way they did at times. I never read the series this was spun off of, but then this new Brooklet Dreams series starter still works well even without that prior Southern Boys reading experience. If you've read Harms's books in the past, you more or less know what to expect and she delivers a new adult love story that satisfies one's need for low-angst, low-drama romance. I'm giving four stars to Allure. ♥