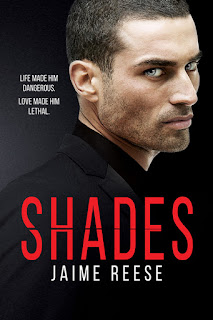 Nick smiled, tracing his fingertips along each curve of Ian's body. “I think you've ruined me for all other men.”

“You ruined me the day we met.”


Gah! This book was such an amazing surprise, like something I never saw coming but in hindsight, I would never have forgiven myself had I missed out on reading it. Jaime Reese isn't a new-to-me author, and I know what she's capable of in terms of storytelling, thanks to her popular Men of Halfway House series, but her new standalone release is above and beyond whatever it was I could have hoped for, not only when it comes to her books in particular but in any book that falls under the romantic suspense genre. There was this constant and consistent thrum of intensity from beginning to end, and two main characters who had absolute chemistry and didn't rely on being cutesy or drumming up the sex, plus a small handful of supporting characters who added even more flavor.

At forty-five, Killian Marks should be more than ready to hang up his holster and call it a day. Becoming a third-generation hitman may have been a given, but over the past few months, he's been contemplating what life would be like without hunting down a new target. Meeting a thirty-two-year-old restaurant server may have something to do with his need for peace and quiet...and a life that he can share with someone special...someone like Nick Holloway. The guy is both professional and personable, and over the past six months or so, he's become a constant in Killian's life. There's an underlying attraction between them, one that Killian can only hope is mutual, but will Nick even want to be with someone like him--someone with blood on their hands? What Killian doesn't know is that Nick has his own dark secrets, and the ties that bind them may be more entwined than they thought possible.

I'm putting this out there right here, right now: Shades is one of my top reads for 2018. Now, I know that I have a whole bunch of other books that have five-plus-star rated reads, but five-plus stars is as high as my current ratings system will go, but I don't include every single one on my year-end list. There's a whole lot of picking and choosing that goes on, and the books that stay with me for a longer, more extended period of time rank way higher. And this book? This awesome, passionate, and extraordinary novel from Jaime Reese? Well, keep an eye for it come the end of the year. Killian and Nick are the kind of main characters who have a story to tell, and it's one that I couldn't help but become invested in. It's rich and multi-layered and complex and absolutely fantastic. Reese's writing is constantly on-point and she entices her readers to immerse themselves in anything and everything that all her characters are going through. Do yourselves a favor and read Shades as soon as humanly possible. Five-plus stars! ♥