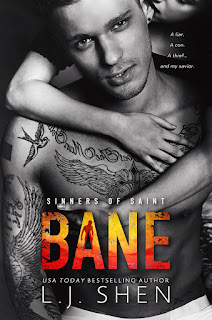 “I want your ass. Happy? Want it with the scars. With the fucked-up, tragic story. With every fiber of my body, I want to fuck you, and own you, and bruise you, and save you. But I can't do any of those things. Why? Because you'd hate me afterwards, and that's a fact, not a speculation. Mark my words. For reasons I can't tell you right now, fucking you will break you and ruin me. And I may be a bastard, but I'm not the fucking villain.”

One of the things I love most about L.J. Shen's Sinners of Saint series is that while the titles and covers of each of the books are about the anti-heroes from Todos Santos, California, the guys share equal billing story-wise with the women who irrevocably change the trajectory of their lives. While we've got all four HotHoles snagging themselves happily-ever-afters, Shen isn't quite done with this highly addictive series even with the spin-off focused on the next generation of the young and privileged in Todos Santos already announced. Bane is the fourth full-length novel and fifth overall release in the original collection and it serves as a standalone spin-off since the main character isn't a HotHole. Nope, he's none other than Bane Protsenko, introduced in Scandalous.

Twenty-five-year-old Roman Protsenko has lived up to the nickname bestowed upon him as a teenager. He makes no apologies for being who he is--a Russian bastard, an escort in a league all his own, a pothead surfer with a gift for extortion. For his latest deal, he needs a few million, and when his investor offers up the money in exchange for Bane to get up close--but not personal--with his nineteen-year-old stepdaughter, Bane thinks it's easy-peasy. But Jesse Carter is a girl who's been through hell and in the two years since, she hasn't quite made her way back. The old Jesse was left behind in that dark alley and the new Jesse refuses to be touched and only counts her elderly neighbor and her loyal dog Shadow as her friends. There is nothing easy nor simple about his broken girl, but Bane thinks he's up to the challenge. He wants to save her; Jesse is destined to save herself.

Not all female main characters are heroines but if anyone deserves the label of "heroine", it would most certainly have to be Jesse. Bane may have noticed her from his perspective in the prologue, but it's from her perspective in the very same prologue that I take note of her and remains etched in my consciousness from that point onward. Two years after, Bane is contracted to become her savior of sorts, and while it's true that Jesse does need saving, it is the damsel in distress who proves to be her own hero. There's no knight in shining armor galloping in on his mighty steed. Hell, Jesse doesn't even have a shield or sword to ward off her enemies. She falls numerous times, but she learns to get back up and while Bane's entry into her life was under false pretenses, it's his presence in her life that she creates and fortifies a stronger support system for herself. Both Jesse and Bane find love, and in the process, find home and a truer purpose as well. Five-plus stars go to Bane. ♥