Review: I Flipping Love You by Helena Hunting (Shacking Up #3) 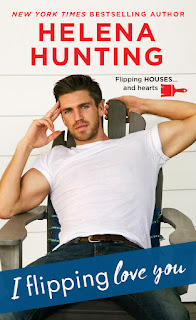 The desire is visceral, a shimmer in the air, a heat in my veins, and a fire in his eyes.

That is what wanting someone is.

This is the pinnacle of desperate attraction. This is the chemical reaction that ignites and burns until there's nothing left but ash.

This insatiable craving is why people ignore a two out of ten on a compatibility test.


This series makes me want to shack up, get down, and hook up with every single book that's released because I flipping love it. See what I did there? I've got bestselling author Helena Hunting's Shacking Up series on the brain because of the latest and yummiest release, I Flipping Love You, which has Pierce Whitfield, older brother to Amalie from Hooking Up. The patent lawyer for his family's company, Pierce has left behind his office and penthouse in Manhattan for the sand and surf of the Hamptons, hoping the time away will help him refocus and not repeat the mistake he made over an important patent that's now causing their company a major headache. Buying real estate and flipping or renting them out gives him the opportunity to do something he actually enjoys for a change, but while he's loving the Hamptons, he certainly doesn't appreciate finding his Tesla involved in a hit and run while parked. When he finds the powder blue Buick in a grocery parking lot, Pierce confronts the culprit only to realize he's got her twin instead. Rian Sutter is about to totally flip Pierce's world.

All the details I just mentioned in the paragraph above? Well, that's just the tip of the iceberg, but I had to hold myself back in fear of me accidentally adding a spoilery bit here and there. I finished this book in one sitting, and I was smitten with Pierce and Rian from the moment he condescendingly called her "sweetheart" and she gave him a piece of her mind. These two had the whole back and forth thing going on from the get-go and they had the kind of quick banter that I love in romantic comedy reads like this one. They also happened to have their chemistry down pat, and while their compatibility score may have been really low, I dare say that the algorithms were probably all screwy, plus while two people may look ideal on paper, nothing beats actual interaction. Pierce and Rian were sweet and sexy, but they were also involved in stuff that raised the hilarity factor of this book, making for an even more enjoyable read. There was also a bit of drama in terms of miscommunication and secrets being kept, but all in all, this was a truly lighthearted, fun-filled rom-com novel.

Aside from Pierce and Rian, there were also notable supporting characters, specifically their respective siblings who were living with them--Pierce's younger brother Lawson and Rian's older twin sister Marley. With the way things ended with Lawson and Marley, I wonder if those two are going to be getting their own story in the series and if they actually end up being paired for it. We also have cameo appearances from Amalie Whitfield AND Lexington Mills, but I shall it at that. You know, to avoid spoilers. But to be fair, reading the first two full-length novels and the Halloween novella isn't necessary in order for anyone to enjoy this new novel. Of course, me being who I am, I'm still going to recommend the other books because I adored reading them, and hopefully, you'll get a kick out of the stories those particular there have to tell as well. I'm not entirely sure if there are more books in the offing for the Shacking Up series; I certainly hope that the series will continue, because I think there's potential there! For now, I flipping fell for I Flipping Love You and give it five-plus stars. ♥

Shacking Up (book one) - five stars - My Review

Getting Down (novella) - five stars - My Review

Purchase I Flipping Love You on Amazon | B&N | iBooks | Kobo.