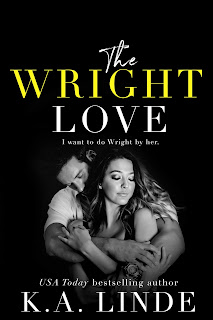 Then, I felt an even smaller shift, and then her pinkie was touching mine in the space between our bodies. She looped her pinkie over mine, and a shuddering exhale left her body. Something exploded in my chest at that one touch. That one move changed the entire dynamic of us forever.

I'd been wrong when I said I hadn't been aware there was an us.

There was definitely an us.

I just finished reading The Wright Love, the first in the duet by the same title and connected to the Wright series by bestselling author K.A. Linde, and I had two immediate thoughts: le sigh and argh! The first because goodness me, how I wanted Sutton Wright to have another shot at a happily-ever-after; the second because damn it, that cliffhanger ending and the revelation which preceded it caught me completely unaware, and now I need to wait a couple of weeks before the conclusion, The Wright One, is released. Going into this, it was obvious that Sutton would be paired with David Calloway, CFO of Wright Construction for a year at the beginning of this book, but their love story--one very much bound in a firm friendship--was one that evolved over time and it was so swoon-worthy.

On the first anniversary of her husband Maverick's passing, Sutton Wright decides it's time for her to live again--not just for their two-year-old son Jason but for herself. She takes a job in a bakery and even asks her friend David Calloway out for a movie. It wasn't meant to be a date even though it very much felt like one, and that kiss at the end certainly cemented that idea in both their heads. There are times Sutton is still unsure about what it is she's doing with David, especially because she has a young son to consider. Would it be so wrong for her to pursue her attraction and growing feelings for the man who's been there whenever she needed him over the past year? It feels as if they've been building towards more for so long, but just when everything feels solid, will secrets and lies let it all fall apart?

The ending to this book nearly made me want to throw a major tantrum, not because of anything negative but because I seriously needed to know what awaited not just Sutton and David but the rest of the close-knit Wright siblings and their significant others. I never saw the twist coming, and it wasn't some prolonged thing either. It was this revelation that was so out of the blue, that I literally had my mouth hanging open in shock. To be perfectly honest, I have no idea how everything is supposed to move forward after what come out into the open. You'll fully get what I'm talking about once you read the book, and I know I'm being whiny about the two-week wait, but I'll take a couple of weeks over a couple of months or longer. The Wright Love was everything I hoped it would be. Five-plus stars. ♥