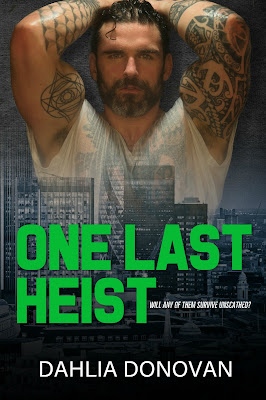 About One Last Heist
One last heist.

It should’ve been easy. Crack a safe, steal from a villain, and go on vacation. The last thing Mack and Toshiro expect is to descend into a nightmare of betrayal.

Mack Ueda-Easton loves three things: his husband, heists, and his odd family of friends. He lives life on the edge. The only cloud on his horizon is the degenerative disease stealing his sight.

Toshiro Ueda-Easton tries to juggle his husband, his autistic sister, his interfering mother, and all of their heists. He knows they’re spiraling out of control and the journey they’re travelling can’t last.

What neither of them expect is to get catapulted straight into a dangerous conspiracy. They’re now in a race to come out on top. If they fail, the consequences are unimaginable.

Read my five-plus-starred review of One Last Heist.

Add One Last Heist on Goodreads.

About Dahlia Donovan
Dahlia Donovan wrote her first romance series after a crazy dream about shifters and damsels in distress.  She prefers irreverent humour and unconventional characters.  An autistic and occasional hermit, her life wouldn’t be complete without her husband and her massive collection of books and video games.