Review: Dirty Player by Mira Lyn Kelly (Back to You #2) 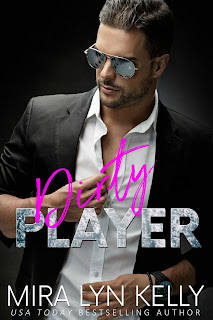 His eyes close, and he blows out an emotional breath. "I love you too, Jules. I'm never going to let you go."

"Promise?" I ask, taking his big hand in mine.

He nods, that cocky smile slanting at full strength. "Swear."


Two books in and Mira Lyn Kelly's Back to You series is proving to be rather addictive! Professional hockey player Greg Baxter was introduced in the first novel, Hard Crush, and in the friends-to-lovers second novel, Dirty Player, a ten-year-old promise written in his high school yearbook opens the door to a host of lustful and romantic possibilities with television sports journalist Julia Wesley. Greg knows all about his best friend's rule about not dating pro athletes, not if she wants to be taken seriously in her profession, but what's a kiss between friends, right? After all, she did agree that if neither one was involved with anyone a decade after graduation, she owed him a kiss. But when one kiss leads to more, Greg isn't above hoping that it could lead to something else for the two of them--dating and maybe even a relationship. For a woman like Jules, however, becoming involved with a sports figure could call her credibility as a reporter in question, and she's worked too hard to get to this point in her career. Can she keep her relationship with her dirty player under wraps for long or will she finally come clean?

Le sigh. I loved Greg and Jules. They had that kind of friendship that was easygoing and they were clearly very comfortable with one another, and when they transitioned into having an actual romantic and sexual relationship, you could tell that they just belonged together. There was very minimal angst, with the main sticking point being Jules's decision to keep their relationship a secret for the foreseeable future, what with her boss constantly reminding her that it wouldn't be good for her image to become involved with an athlete. The banter and lighthearted feel had me grinning for majority of this book, although I confess that there were a couple of times that I wanted to shake Jules because Greg wasn't the sort of guy who deserved to be treated like he was some dirty little secret--even though the guy really had one hell of a filthy mouth on him! Greg was, indeed, a hockey player, but there wasn't as much in terms of sport in the book, so I wouldn't necessarily classify this as an actual sports romance but it does fall rather perfectly under the friends-to-lovers trope. Five-plus stars go to Dirty Player! ♥

Read my reviews for the Back to You series: