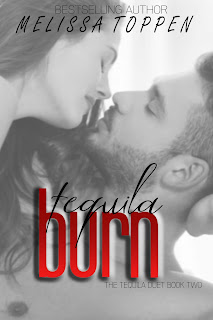 After the cliffhanger ending in Tequila Haze--and a two-week wait--bestselling author Melissa Toppen has released Tequila Burn, the conclusion to her Tequila duet. Now, I can't really gripe about the wait since I already had an advanced copy of this second book, but what I will say is that the story is so good that it should be worth the short (enough) waiting period between book releases. Having said this, I'm going to reiterate that these novels need to be read in order: Tequila Haze first and Tequila Burn after. This will give new readers a better idea as to everything that came into play with Hudson Demasi (aka Hudson James) and Lennon Claire's complicated but sweet romance.

When Lennon learns the one thing that Hudson's been keeping from her, she's at a loss. How could they possibly move forward from such a revelation? Hudson knows he should have said something sooner, and he knows he's going to have to work hard to prove that the only woman who's in his heart is the one he started falling for during that one unforgettable night together five years ago. But with his career finally taking off, Hudson is being pulled in several directions. Becoming a successful singer and songwriter has always been his dream, but is it one that he can ultimately share with the woman that's become his entire world or are Hudson and Lennon not meant to be?

Nothing came easily to Hudson and Lennon, and while there was no denying how in love they were with each other, there were other factors that needed to be taken into consideration. I can only imagine how difficult it would be to be in a committed relationship with someone who was constantly in the public eye plus had unresolved issues in their past. I liked that these two had a strong support system around them and that these supporting characters proved to be as entertaining as the main characters. Melissa Toppen, as always, has written a romance that's both swoon-worthy and worthy of all the time you put into it. I'm giving five stars to Tequila Burn.

Read my reviews for the Tequila series: