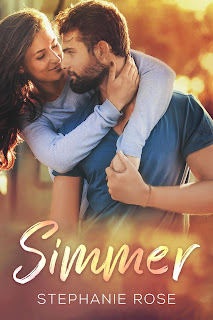 “Why are you so fucking wonderful?” She wailed as her head shook. “How am I supposed to not—”

“To now, what?” I pressed, peeling her hands away from her face.

“To not fall in love with you?”

I first discovered Stephanie Rose's writing a couple of years ago, and I've enjoyed the releases that have landed in my tablet ever since. There's a simplicity to her stories, and by that I mean that she doesn't over-complicate the tales that she tells. There's angst but there's also a lightheartedness that Rose never fails to intersperse. With her latest contemporary romance release, she gives a single mother making a go of a dream put on hold her much deserved shot at a happily-ever-after of her own. The "she" in question is a familiar one to those who've read the author's previous standalone, Rewrite, and while you don't necessarily need to read that in order to understand what happens here in Simmer, I recommend you read the earlier release as well in order to have a thorough appreciation to the relationship between the couple there and the female main character here.

Thirty-two-year-old Sara Caldwell's life for more than nine years has been about her eight-year-old daughter Victoria. When she has the opportunity to finish her culinary degree, she takes Victoria's father and his girlfriend up on their offer to let the little girl stay with them for the year it'll take for Sara to do so. Four hours away from her daughter, Sara battles her homesickness by reminding herself that being away from Victoria was necessary if there was any hope for them to have a better life. She can't afford to be distracted, especially the kind of distraction that twenty-five-year-old Andrew Kostas presents. After much persistence, Sara agrees to become friends with the gorgeous IT grad student. As Sara grows to trust Drew, her walls slowly but surely crumble down, but will she choose to keep the fire of attraction stay at a simmer or finally allow it to boil over?

I wasn't a fan of Sara's in Rewrite, although I more than understood why she acted the way she did with the sudden reappearance of Josh Falco and the fact that he had a seemingly perfect partner in life in the form of Brianna Morgan. Knowing her back story and having a better understanding of the kind of mother that she was to Victoria and the woman she was as she worked on her culinary degree. Here in Simmer, readers get to know Sara the single woman who had never been in love and knew only rejection from those who were supposed to love and accept her unconditionally. We also get to see her go after her dreams of becoming a chef, and how she learns that she is more than capable of balancing all the aspects of herself--including that of a woman falling in love with Drew, who is hands down, one of the most endearing male main characters I've ever come across. Talk about swoon-worthy! But then, Simmer IS swoony along with being sweet and sexy. Five-plus stars. ♥