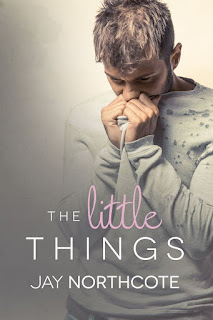 Originally published in November of 2013 through Dreamspinner Press, The Little Things has been re-released a self-pubbed standalone by Jay Northcote. This had a twenty-three-year-old school teacher named Joel Mason. He shares a three-year-old daughter named Evie with one of his best friends, Claire, and is in an open relationship with Dan, a guy four years his junior, although Joel isn't looking to hook up with anyone outside of his boyfriend. When tragedy strikes, Joel finds himself becoming the sole parent in Evie's life, and it soon becomes increasingly clear that the relationship he has with Dan doesn't provide him with the comfort it once did. When he crosses paths with hospital nurse Liam more than once, it's as if they're meant to become friends...and more. The attraction is unwavering, but can Joel trust his feelings or will his fears reign supreme?

This is, ultimately, Joel's story. We get a good idea of how his life was when he was co-parenting with Claire and involved with Dan, and then we bear witness to the unquestionable grief he was dealing with and the aftermath of what happened with Claire and the demise of his relationship with Dan. We then see Joel learning to be a solo parent and guardian to Evie and how his life has changed and then as he tries to figure out what kind of relationship he wants with Liam. I know a lot of people use the term "coming of age" for young adult (YA) stories, but I'm a firm believer that one doesn't merely come of age in terms of the number of years they've been on the planet, but also as they mature and learn how to deal with the challenges life throws their way. This book was Joel actually coming of age--as a man in general, as a father to Evie, and as a boyfriend to Liam.

Northcote's stories--at least the ones that I've had the pleasure of reading--have always had a good amount of angst to them. I liked seeing Joel get his footing as Evie's full-time father, all the while trying to balance that with his being a teacher, a brother to his older sister Miranda, and a boyfriend to both Dan and Liam (not at the same time, of course!). He is twenty-three, after all, so it's not as if he's this man whose experienced a whole lot in life, but he is someone who knows what loss feels like, so his being wary when it came to Liam was understandable. He's overwhelmed more by what he potentially has with Liam than he is with the knowledge that his little girl has only him as her parent. Dan wasn't necessarily a bad guy either, so kudos to Northcote for not going the expected route with him. Overall, The Little Things was a heartrending but sweet read. Four stars. ♥

Purchase The Little Things on Amazon.