Review: Between the Raindrops by Sydney Logan 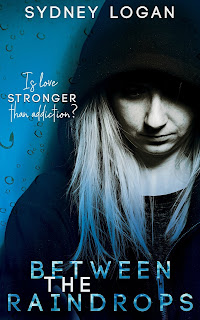 I'm ready for it this time.

Because I know that, no matter what happens, I always have a home to go back to. I have someone who will be there for me if she relapses.

But for tonight, there's hope.

In a small town like Cedar Springs, seventeen-year-old Scout Ramsey wasn’t all too surprised just how quickly word got out of who she was and what circumstances led to her being the newest student at the local high school. But then, having an addict for a mother who was willing to sell her only child for a bag of meth and having to be placed with her late father’s brother isn’t exactly the kind of tidbit that stays quiet for long. Being the new girl with a sob story is more than enough for others to take note of her, but fellow senior Wyatt Campbell does so because she’s sitting in his seat. Of course, if he was being honest, he also noticed just how feisty the beautiful girl with freckles was beneath her quiet demeanor. In Wyatt, Scout finds a protector, a boy who wants to take care of the girl who’s been through too much and deserves better. She’s already been through many a storm in her life, but maybe now, she’ll bask in the sunshine, too.

It’s been some time since I’ve been able to read a young adult (YA) story that’s affected me as much as Between the Raindrops has. I’ve read several of Sydney Logan’s books in the past, but this new YA standalone of hers is perhaps what I would personally consider her best and my favorite. Scout’s story is one that becomes entwined with Wyatt’s once she ends up in Cedar Springs. We the light and dark of her world—what happens between the rain and when the sun starts to peek through. Told from both Scout’s and Wyatt’s points of view, this really is about Scout’s life in transition—how she goes from a victim of her circumstances to an evolving survivor. We get bits of Wyatt’s life as well, but a lot of his POVs have to do with Scout and how he’s taken by her and then his thoughts and feelings about her situation and how he wishes he could do more for the girl that’s got a firm grip on his heart and he’s hoping she’ll never let go of.

I loved everything about this book. The story was heartrending to read at times, but Scout’s situation isn’t as far-fetched as you would think. Too many times, we’ve heard of children who are forced to have a ringside seat to the failings of their parents and guardians—the adults who should know better and put the welfare of the minors under their care first. But like I mentioned earlier, Scout is a survivor and her story was one that makes me hope that there are more like her who get back up and make better lives for themselves. Yes, this was a YA story, but who says you have to be a teenager to not only enjoy it but to appreciate it. From Logan’s superb writing to the small but mighty gathering of unforgettable characters, each one playing a role in Scout’s story as a whole and her love story with Wyatt. If I had to choose just one YA book to recommend you read this year, it would be Between the Raindrops, which gets five-plus stars. ♥

Purchase Between the Raindrops on Amazon | B&N | iBooks | Kobo.