Review: One Baby Daddy by Meghan Quinn (Dating by Numbers #3) 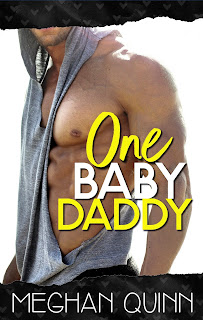 I've been looking forward to reading Hayden Holmes's story ever since I got to meet him in Back in the Game, Meghan Quinn's contribution to and one of my absolute favorite stories in the multi-authored Team Player anthology which was released late last year. In One Baby Daddy, the third and final full-length novel in Quinn's Dating by Numbers series, the NHL Golden Boy's rookie season ends on sour note, and all he wants to do is to get as far away from the probing questions and judgmental looks. When he ends up at his best friend's place in Binghamton, he's caught snooping around by a pretty young woman named Adalyn. She captures his attention and spending the whole summer with her sounds like the perfect thing to deal with his low spirits. He wants to forget the debacle that happened on the ice, but what happens is it's Adalyn who forgets...to take her birth control pills, leading to one very unplanned pregnancy. It becomes clear to Hayden what it is he wants and that a chance at a family and a future with her. The question is, will this baby daddy get his baby mama to say yes?

It's difficult to resist Meghan Quinn's male main characters and not because they're perfect. Each one I've come across has their own cache of flaws, but there's always been something about them that makes them absolutely swoon-worthy. Hayden absolutely lives up to my expectations of a Quinn hero, and he was the best thing about this book. In both Back in the Game and Three Blind Dates, he already had me sitting up and paying attention, which is why I've been itching to get my hands on his book since Team Player. The novella and the two full-length novels in the series had me hoping this last novel would be just as good, if not better. Well, it was actually quite good. I adored Hayden; Adalyn, however...well, not so much. I get it, she had issues, but it felt as if her issues had issues and it got to the point that I wondered if she was worth everything that Hayden had to go through in order to even convince her to give what they had a chance. So, while I loved the author's writing as much as I did Hayden, Adalyn dampened my otherwise gleeful spirits. One Baby Daddy easily gets 4.5 stars. ♥

Read my reviews for the Dating by Numbers series:

Purchase One Baby Daddy on Amazon.