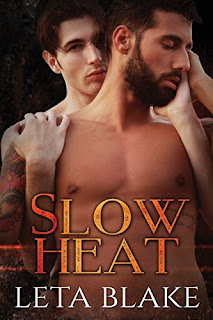 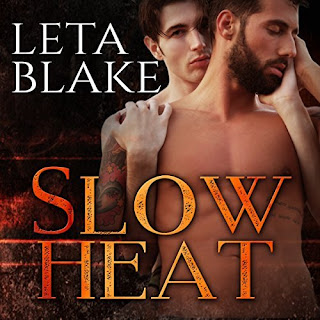 Note: This ebook and audiobook were provided by the author via Signal Boost Promotions in exchange for an honest review.

I listened to and loved Leta Blake's two previously released audiobooks Smoky Mountain Dreams and Training Season, earlier this year, so listening to her newest one, Slow Heat, was a no-brainer. I was also going to be reading the ebook while listening to this first in Blake's Heat of Love series. This is an omegaverse series, omegaverse basically being an alternative universe and is composed of males only born as alpha, beta, or omega. Blake's particular omegaverse has alphas considered to belong to the top tier of society and they're able to mate with omegas, either through contractual means or through what's known as "Erosgapé", also known as a destined coupling similar to being soulmates. Once together, an alpha can impregnate his omega.

This omegaverse world that the author has created is a non-shifter one, so all the characters are, indeed, human, although there are mentions of a wolf-god and the idea that they are evolved from wolves rather than primates (though this theory is something a couple of the characters are studying). The omegas experience heat cycles and alphas experience knotting, which is similar to canines who "tie" while mating. The romantic and sexual relationship between alpha and omega is at the heart of this series starter, but we also see how the classes mix and mingle as well as the politics involved with the alpha-omega contracts when it comes to both parties and other highly interested parties too, such as well-meaning but overly protective parents and friends.

Slow Heat is the story of a nineteen-year-old university student named Jason who unexpectedly finds his Erosgapé while walking across campus. Thirty-five-year-old university professor Valendo Aman gave up on the dream of being found by his alpha, but he can't seem to reconcile the dictates of his heart and the rest of his body with what his mind is reminding him--that he could very well lose his feeling of independence and the life he's created for himself over the past three and a half decades once he contracts with his much younger alpha. Jason strives to be the alpha that Vale needs and deserves, and while Vale wants the promise that Erosgapé offers, there's a dark secret that he's keeping from Jason that threatens any sort of future with his loving mate.

To be perfectly honest, it took me a good, long while for me to become immersed enough in the story for me to be able to enjoy it. Omegaverse stories aren't new to me, but this particular was different because of the idea of a wolf-god, giving it a far more religious aspect than I was expecting. In hindsight, I guess that unfamiliarity affected my absolute appreciation for the story itself, though I did like how Leta Blake opened my eyes to this new world of hers and to her cast of characters and the stories they had to tell. Michael Ferraiuolo is a familiar narrator, he did an excellent job of distinguishing each character and bringing this thought-provoking tale to life. I'm giving four stars to the ebook edition of Slow Heat, and 4.5 stars for the audiobook. ♥