Review: All the Little Lights by Jamie McGuire 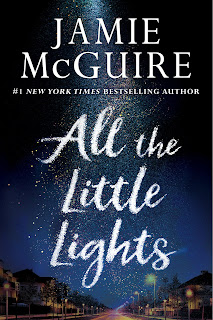 Note: This ARC was provided by Montlake Romance in exchange for an honest review.

I stood at the window, already knowing Elliott would be out of sight. He was different—more than just odd—but he had found me. And for the moment, I liked not feeling lost.

All the Little Lights is a young adult (YA) novel penned by bestselling author Jamie McGuire, and it isn't your usual YA romance read either. Unsurprisingly, McGuire has weaved a tale of two young people who find their way to each other only to be forced apart by circumstances beyond their control. When they're both seventeen, Elliott Youngblood forges the journey back to the tiny town of Oak Creek, Oklahoma to keep a promise he made to Catherine Calhoun. It's a promise she believed he broke two years prior, at a time when she needed the one person she believed she could lean on most. Elliott may very well convince Catherine to forgive him and give him another chance to get close to her, but while there are parts of them that have remained the same, there have been more that have changed over the span of a couple of years. As much as Elliott wants to get to know all the new things about Catherine, she knows that there is one particular secret that she needs to keep, because if the truth were ever to come out, he could very well leave her again--and this time, he'll do it willingly.

This book was way more than I was expecting it to be, and because I've read my fair share of Jamie McGuire's work in the past, I had quite lofty expectations to begin with. There is a love story that takes place, and it's one that's perfectly interspersed with the intriguing goings-on within the Juniper, the mansion that was once home to Catherine and her parents but was turned into a bed and breakfast by her mother after Catherine's father passed away. I was totally taken in by both aspects of this story because they never felt two separate elements. Catherine was at the very heart of everything that was going on, and Elliott made the very conscious choice to be by her side regardless of what was to come. This book also highlights the all too real issue of bullying and it isn't just up to those who are bullied to speak up but for adults to play a more active role in being aware of what these kids who are under their care are doing and doing something about the bullying. The same goes for what was suspected as neglect in terms of Catherine's well-being and care. Better to be proactive than reactive.

If you've read McGuire's books before, and you're hoping this is going to be something similar to her new adult (NA) stuff, I'm going to go ahead and tell you that this standalone is not like those. This book is very different, and in hindsight, I shouldn't even have been surprised. This is the same author who wrote a paranormal romance trilogy--which is what introduced me to her writing!--and a post-apocalyptic tale and those stories are on equal footing as far as I'm concerned with her NA romances. With this newest novel of hers, McGuire has offered up something extraordinary, and I for one enjoyed the heck out of this book. Catherine and Elliott's romance was easy enough for me to become fully invested in, but the same went for their individual stories. Just like stars shining brightest in darkness, these two teenagers may have gone through their share of challenges and adversities, but it was during those times when they realized just how capable they were of pushing beyond limits and moving ahead. All the Little Lights is a five-plus-starred must-read recommendation. ♥

Pre-order All the Little Lights on Amazon.