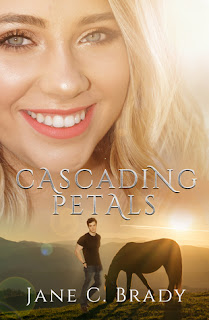 Note: This ARC was provided by the author via Xpresso Book Tours in exchange for an honest review.

Cascading Petals is a coming-of-age story and the debut release from Jane C. Brady. It tells the story of a high school senior Jewel Hart. Considered a "triple threat"--pretty, talented, and popular with boys--Jewel has long been a target of her female peers and just wants to graduate without any untoward incidents marring her final year in York Mills High. Friendless Jewel unexpectedly finds a friend in the form of the new transfer student--Kaiden Carter is good looking and a genuinely nice guy. They spend more and more time together and it's clear from the get-go that they're both attracted to one another. But as perfect as Kaiden seems on the outside, there's a sadness to him, one that Jewel glimpses every now and again. Rumors abound, tarnishing Jewel's reputation, but it's one particular suicide that threatens to knock the two down. How will they survive such loss and devastation?

I admire the author's desire to put forth a story that is, sadly, one that many readers are all too familiar with. There are too many stories of bullying that goes on in schools and suicide among teens is an all too real and rampant issue. Jewel is trying to make do with her circumstances, but over time, she does begin to speak up and stand up for herself because unfortunately, too many of the adults who were supposed to do something about what was happening in the school failed her and many others like her. My father has always reminded my siblings and I to choose our battles, but when we know we're in the right to act on our need to defend ourselves if need be. Pooh-poohing something as serious as bullying or completely turning a blind eye to it is part of the vicious cycle and the ultimate victims are all the children and teenagers who are unable to speak up for themselves and do not feel safe.

The story is told from several perspectives, and while I'm good with dual points of view when they involve the main characters, this one had too many. I give kudos to the author for wanting to try something different by including the POVs of the antagonists, but to be honest, they were nothing more than distractions and I didn't understand what the ultimate purpose was. Was I supposed to have some sort of sympathy for them or have a better appreciation for why they were the way they were? The thing is, I felt neither, and this became a case of too many cooks spoiling the broth. Let me reiterate that I tip my hat to Jane C. Brady for writing a book that had a couple of serious and noteworthy issues, and while there were flaws when it came to the execution, she has my respect for, at the very least, taking the challenge. Cascading Petals was an overall pretty okay read and I'm giving it 3.5 stars. ♥