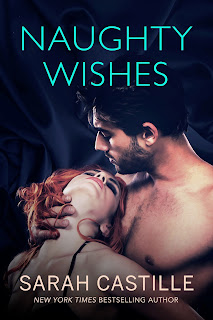 Naughty Wishes is the second novella in the Naughty Shorts series written by bestselling author Sarah Castille. Still set in the same small town as the first story, this features a different married couple--Dan and Kylie--but still shares one particular peripheral character--Dr. Aiden Steadman. On Kylie's thirty-fifth birthday, she expects nothing more than the usual: a card from her sons and a greeting from her husband. However, the note Dan slips under her pillow knocks her for a loop--it's a homemade coupon that promises one ménage. Kylie's heart has and always will belong to one man and one man only, and that's Dan, but she can't deny that having a threesome has always been a fantasy of hers, and her husband intends to fulfill it. When Kylie's wish comes to fruition, will they both regret it?

Just like the novella before it, this was a steamy read, one that has a husband hoping to hold on to his wife by granting a fervent yet seemingly forbidden wish of hers. Dan and Kylie may have been married for a decade and a half, but it looked as if they still had a secret or two they were keeping from one another, especially on Dan's end. I liked the chemistry between these two and while the first couple of chapters were more timid than anything else, once Aiden entered the picture, the heat level went up a few notches. The town dentist may be a guy with a very kinky side, but he also seems to be exactly what some of the couples need. I liked how the author allowed things to play out once Aiden, Dan, and Kylie were together, and the ending was sweet. Four stars go to Naughty Wishes. ♥

Read my reviews for the Naughty Shorts series: