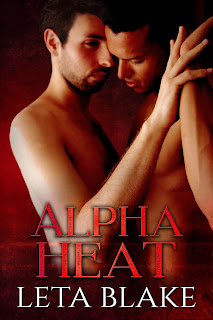 Having already gotten a feel for Leta Blake's omegaverse, her second Heat of Love novel definitely clicked me more with me than its predecessor (not that series starter Slow Heat was a terrible read; it absolutely wasn't!). While I do think you can read Alpha Heat independent of the first book, I'm going to seriously recommend you read these two books in order, not only because of recurring characters whose story does continue here, but also because you get a much better sense of this particular omegaverse and if you're new to the romance sub-genre as a whole, there's a fair amount of information included there. Also, the main characters in this second book were introduced in that first one, and you'll have an inkling why a potential relationship is so complicated.

Alpha Heat is the story of twenty-four-year-old Xan Heelies, an alpha who wants to be in a committed relationship with another alpha. Unfortunately for Xan, such a thing isn't merely frowned upon; it's considered forbidden and very much illegal. Seeing no alternative, he agrees to be contracted with twenty-nine-year-old omega Caleb Riggs, who isn't just asexual but aromantic as well. Xan needs to keep his secret desires under wraps, but when Urho Chase, who is an alpha nearly twenty years Xan's senior and is the best friend of Xan's best friend's omega, discovers what the much younger alpha's is hiding, Urho is shocked...and intrigued. He hasn't been as drawn to anyone since his late omega's death as he is to Xan, but what kind of life can two alphas have when the law states they cannot be together and when one's already contracted to his own omega?

For the record, this isn't your typical threesome/triad story and the manner in which the author has structured the relationship of Urho, Xan, and Caleb guarantees that it works. The fact that Xan and Urho shouldn't even be involved with one another intimately would have made this an intriguing read, but add in an asexual omega? Well, Leta Blake doesn't do anything by halves as evidenced by the books she's penned that I've read and enjoyed. I loved seeing the interplay between Urho and Xan, Xan and Caleb, Urho and Caleb, and all three as an unlikely unit. Fans of the series will also be happy to note that Jason Sabel and Vale Aman, whose story unfolded in Slow Heat, get their happily-ever-after here. Also, there is a happily-ever-after for our new main characters here, but how everything works out is something I'll keep mum to avoid spoilers. Having already listened to the audiobook for book one, fingers crossed book two will follow soonish! 4.5 stars for Alpha Heat! ♥

Read my reviews for the Heat of Love series: