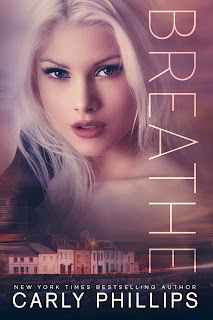 I've read a few of Carly Phillips's series in the past couple of years, and it just dawned on me that her Rosewood Bay books are the first ones that I've encountered that have a sole female on each of the covers. I have no idea if she has other books with just a woman on the cover, and I'm a wee bit pressed for time writing this review, so I can't go and check on Goodreads, but my observation is based solely on Phillips's books which I have already had the pleasure of reading. I love that she's only got the Ward sisters on the covers, but what I love even more is the fact that the stories Phillips shares, at least based on the first two books, aren't mere fluff, aka hearts and flowers.

Breathe is the second Rosewood Bay novel and it features the second-chance love story of the eldest Ward sister, Phoebe, and her first love, Jake Nichols. They were both in foster care when they met as teenagers and fell in love, but when once they were caught, everything abruptly ended. Phoebe only found out about her pregnancy after Jake had been pulled out of the home, forcing the sixteen-year-old to lean only on the aunt who had found and taken her and her younger sister in. Nearly twelve years later, Phoebe has raised her eleven-year-old son Jamie well and life has been good. And then, out of the blue, who should come back in her life again but Jake Nichols, the father of her son and the only man Phoebe has ever loved? Second chances don't come often, but will she take it?

I'm not a fan of stories that involve a pregnancy that the father has no clue about, BUT Carly Phillips made Phoebe and Jake's story different from the norm, and the story line was, indeed, more than plausible. I love how Phoebe and Jake still had that connection they once shared as teens, but there was also that wariness and being unsure as to how things were going to play out now that they were older and had experienced life apart. And that's one of my other favorite things about this book; the fact that these two actually LIVED active lives and weren't pining away for more than a decade for each other, unwilling to be with anyone else. It makes it far more realistic. Then there were the kids--eleven-year-old Jamie plus six-year-old Callie from his previous marriage--who added even more dimension to this story. This series is on track to becoming my favorite from Phillips yet! Breathe gets five stars. ♥