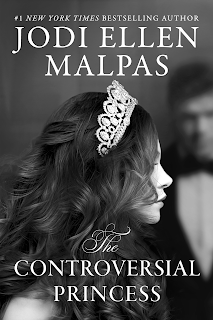 I don't have to think twice. "I love you," I whisper, laying myself bare before him.

"And I love you."His reply is quiet, yet the loudest thing I've ever heard.

Royalty falling for a Hollywood celebrity is not new, and Prince Harry wasn't even the first to do so. Does Prince Rainier of Monaco and Oscar-winning actress Grace Kelly ring any bells? So, no, the idea of someone born into a reigning monarchy falling in love with someone who knows what it's like to have cameras capture their every move, whether they're working or not isn't as novel a concept as you'd think, but let's be honest here: it still piques our interest to heightened levels each and every time. Bestselling author Jodi Ellen Malpas's new Smoke & Mirrors duology explores the idea of a princess known for both her beauty and notoriety and a Hollywood heartthrob known for being sinfully irresistible and how the possibility of an "us" can exist in the worlds they're a part of. After all, happily-ever-afters are only guaranteed for princesses in fairy tales. Reality, indeed, bites...hard.

The Controversial Princess is none other than Her Royal Highness Adeline of England, also known as Adeline Catherine Luisa Lockhart or simply Addy to her brother Prince Edward, aka Eddie. Her story is one she shares with Joshua Jameson, an American actor who may be considered "royalty" in Hollywood but doesn't have the regal background deemed worthy to be with someone like Adeline. These two were like a couple of comets streaking through the sky but destined to crash into one another. There love story is far from conventional; it certainly isn't a fairy tale, but it's one that's filled with tempestuous passion and romance. I can't really give much away in terms of the story, but what I can say is that this is, without a doubt, one of the most heartrending royal romances that I've ever read, and I've read A LOT in my years. This gets five-plus stars, and now the waiting begins for His True Queen. ♥