Review: Fighting for Everything by Laura Kaye (Warrior Fight Club #1) 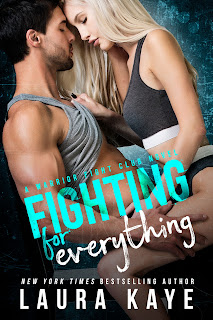 One of my favorite authors has a brand-new series in the offing and after reading the first book, Laura Kaye's Warrior Fight Club appears to be a more than promising series. Fighting for Everything is the series starter, and it's a friends-to-lovers story between twenty-seven-year-old former marine Noah Cortez and twenty-five-year-old teacher Kristina Moore. They've known each other for more than two decades and have been the best of friends for most of that time, but when Noah is discharged from the corps and returns home after sustaining horrific injuries that have made him partially blind and deaf, he is but a shell of the boy that Kristina knew and cared about. He tries to keep his distance from her, more than aware that he will never be rid of the scars he carries, both inside and out. Talking about his experiences in the Marines hasn't helped Noah one bit, and the last thing he wants is to expose his family and friends to all that, but being around Kristina brings him a comfort he's afraid to get used to. He pushes her away, but will he realize too light she's worth fighting for?

I'd be hard-pressed to come up with one title of Kaye's that didn't meet my expectations, but I confess that I was a wee bit anxious for this brand-new series of hers because everything I read up to this point had left me both satisfied and impressed as an avid romance reader. Noah and Kristina have been friends for twenty years, but neither one had been harboring all these feelings of unrequited love, so that certainly made for an interesting tidbit. Even with Noah's post-traumatic stress disorder (PTSD) issues, there was a deep friendship that these two shared but now there was this underlying awareness of each other in a very non-platonic sense. This was truly Noah and Kristina's story, although more of the focus was on Noah and his struggles with PTSD and the alternative forms of therapy both at the Art Factory and with the Warrior Fight Club. We only get glimpses of the other guys who will be featured in the series as it goes forward, but I'm definitely going to be ready and waiting for each book to come. Fighting for Everything was a great start and it easily gets 4.5 stars. ♥

Purchase Fighting for Everything on Amazon | B&N | iBooks | Kobo.