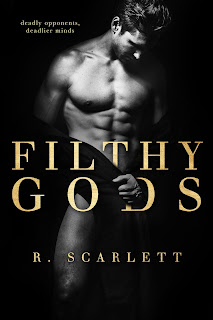 “I'm a greedy, overachieving bastard, Juliette. I examined the risks and you're worth the fall.”


This prequel novella is the introduction to R. Scarlett's American Gods series, and it's also my introduction to the author's writing, and oh my, what an introduction it was! Filthy Gods was every bit as fantastically filthy as I was expecting it to be, but it packed one hell of a punch in terms of story and character development. This had the feisty back and forth that I look for in enemies-to-lovers stories while also satisfying my need for both romance and sex quite nicely. Add to that a fair amount of intrigue as to what it is that the affluent group of twenty-something young men--Gabe Easton, Nathaniel Radcliffe, James Rhodes, and Arsen Vasiliev, according to the ranking they were given while at Yale--known as the American Gods were all about and the power they hold, and I was really smitten and sold on what this novella had and the future full-length novels would have to offer.

Twenty-year-old law student Juliette Monroe knew what it was like to have to fight for the right to be in one of the most prestigious universities in the country. She wasn't born with pedigree or a silver spoon in her mouth, but she refused to let anyone know that, thinking it would be seen as a weakness and used against her. Twenty-one-year-old Nathaniel Radcliffe is her number one rival. They've faced each other in fierce debates and had fiery discussions. They're natural enemies, and she would love nothing more than to knock him down a peg or ten to show him she's better than he is. But she's now working in his mother's family-owned country club, and when Nathaniel makes her an offer to be his for the summer. In exchange, he'll get over his distraction caused by her and her secret stays quiet. They hated each other, but the line between love and hate was about to be burned to a crisp over those hot and heated months of summertime for Juliette and Nathaniel.

Gah! I wish I could find one thing that I didn't like about this novella so that it didn't feel like the unicorn that it was. This being as good as it is can be rather scary because then my expectations for everything that will follow skyrocket to epic heights. How can so much awesomeness be packed into such a quick read? R. Scarlett's writing here is fast-paced and has a good balance of wit and introspection. I loved Juliette's tenacity and drive, but I loved her even more when she was Nathaniel because there was a softer side to her, one that highlighted a vulnerability that didn't necessarily equate to weakness. Then there was Nathaniel who managed to knock me off my feet. He's confident without being cocky and has an assuredness to him yet he doesn't make any assumptions. I thought I had gotten back up and had the guy figured out, but nope! I was knocked back down, and believe me, that's a good thing. Though let's think of it as sweeping me off my feet. Much more romantic, yes? If the rest of the series is amazing as Filthy Gods, it could well be one of the best for 2018. Five-plus stars. ♥