Review: Worth the Risk by K. Bromberg (Everyday Heroes #3) 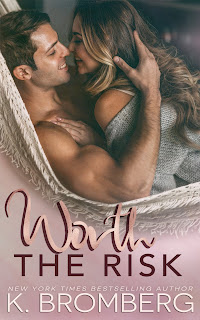 “So, you can keep being scared because, damn you, Grayson...you scare the hell out of me, too.”

I pound my fist on the railing because I have so much pent-up emotion, and I'm so mad at him that it's either that or grab him and kiss him. The latter of which, I don't want to do. “You take risks every damn day in your—you've made a name of yourself doing—and yet, you won't take a goddamn risk on me, will you?”


Originally titled Cockpit prior to its release, Worth the Risk is the third full-length novel in bestselling author K. Bromberg's series focusing on the three Malone brothers--Grant, Grady, and Grayson--each one a first responder who finds love with women who challenge and cherish them. While I personally liked the first title because it works well with the first two in the Everyday Heroes series, the new title does represent the enemies-to-lovers story of twenty-eight-year-olds Grayson Malone and Sidney Thorton. Theirs was a romance that both taunted and tempted them, but in order to truly get their happy ending, they'd both need to take certain risks. Can a man who's gotten his heart--and that of his young son's--broken and who has always been able to take risks when it came to his job take the ultimate risk by entrusting that same heart with a woman who reminds him too much of the ex who abandoned not only him but their son by choosing money over their own family?

When they were in high school, Sidney Thorton was part of the crowd who lived on the hill--that area in Sunnyville where the more affluent families lived--the same crowd who never failed to make Grayson Malone feel as if he and his kind were not worthy. A decade after she left small-town life behind, Sidney returns to her hometown on a mission. She must bring up the readership and profitability of Modern Family, a sentimental favorite of her publisher father. If successful, he promises to give her the position of editor-in-chief of Haute, her dream job. Sidney, however, is as far from domestic as one could get, never seeing herself as a wife and mother. She was an ambitious career woman...but that was before she found herself entangled in gossip and manipulations while heading the search for Modern Family's hottest dads and ensnared by Gray, the frustratingly handsome single father to adorable Luke and publicity-shy hero who kinda-maybe-sorta hates her.

Okay, I admit. This was my favorite novel in the Everyday Heroes series, which is saying a lot since I loved the two previous novels as well. These two had a lot of push and pull, refusing to actually admit that they'd crossed that thin line between love and hate. Well, maybe more of lust and hate in their first few months of being in the same town and interacting with one another. Gray and Sid were highly entertaining as were the supporting cast of characters--i.e. Gray's family, Luke, Gray's co-workers, Sid's father, and Rissa Patel (Modern Family's editor-in-chief). There were a lot of lighthearted moments, but there was also a fair bit of angst brought about by Gray's past with Luke's birth mother. K. Bromberg surprised me with certain routes that she decided to take this story on because they were out of the norm, and thank goodness for that! Like Cuffed and Combust before it, Worth the Risk can be read as a standalone, but all three novels are highly recommended reads. It gets five-plus stars. ♥

Purchase Worth the Risk on Amazon | B&N | iBooks | Kobo.