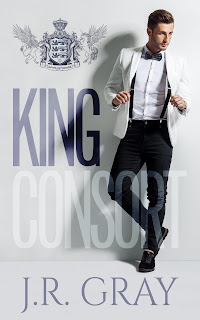 I confess that I have an addiction of sorts when it comes to royal romances, and it stems from my love of British royal history. So, of course, when the opportunity to read J.R. Gray's new standalone romance came along, I jumped right on it. Now, King Consort isn't the first royal romance I've read, and it's not the first M/M romance with a gay prince as its main character, but I was curious to see what story Prince Louis had to tell, and from the moment he takes notice of Xavier in, of all places, a sex club, I was hooked. A sex club with the heir of one of the more prestigious and recognized thrones on the planet? Alert the paparazzi! Oh wait...there's already a paparazzo present--the very same one that the future King of England hooks up with and becomes addicted to.

Louis is gay, and while I'm pretty sure there have been other there have been members of various royal families who were and are gay, none were the heirs to the throne. Or at least, that's as far as we know. Naturally, it's not as if these things were put out there for public consumption--then or now. Rumors abound of monarchs, regardless of marital status, who had both male and female lovers, so Louis being gay isn't something that should even be considered all that improbable. But what I was more interested about in this book was how someone who was next in line to the British throne would fare as a closeted gay man who was falling in love with an American photographer who made his money by capturing celebrities in oh-so compromising positions.

A great deal of the story in King Consort has Louis and Xavier trying to figure out their attraction and lust for one another. In the process, they become friends, X becoming one of the rarefied few that Louis actually ends up trusting. X goes on to be more extraordinary by being a paparazzo who had a conscience. Okay, I might be unfair; there are probably a host of paparazzi that have a heart and don't cross the line. Possibly. I liked the romance between the two men, and found it to be a good mix of heat and heart. Kudos also goes to the three most notable supporting characters--the Queen, Princess Anne, and Doug--who provided some memorably light moments, particularly Doug, who may be like a silent sentinel but his actions more than made up for his quiet.

The one thing that I do wish were part of the book is that the story delved deeper in the process required should Louis come out, but I won't say more about it because I don't want to spoil the story for those of you who have yet to read it. Would Louis give up the throne for love, ala Edward for Wallis Simpson? In the age of Prince Harry and Meghan Markle, wherein a prince falls in love with a woman who is older than him by a couple of years and is a divorcee, an American actress, and biracial, however, it's safe to say that love wins. Who knows? Maybe one day, a gay king, lesbian queen, or queer royal would sit on the throne, openly proving again that sexuality has nothing to do with being a fine monarch. For now, King Consort indulges my hope. 4.5 stars. ♥