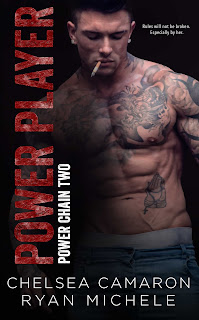 Power Player is the third release but second full-length novel in the Power Chain series written by the writing duo of Chelsea Camaron and Ryan Michele. Here we meet Paxton Williams, a man who likes to be in control of the world around him--a man who doesn't like being rejected or pushed to the side. He's used to getting what he wants, but if he thought Laurel Conrad was going to simply give in to whatever he wanted, he was in for a surprise. The woman wasn't going to make his pursuit of her easy, and while Pax isn't immediately thrilled at the idea of actually having to work for something, he realizes the reward will be more than worth the effort. After all, Laurel is a challenge he isn't just going to meet; Pax's laying his claim, whether Laurel's ready or not.

Just like Onyx before him, Pax is a force to be reckoned with, and he wasn't the kind of main character that you immediately fall for. Not a shocker considering this particular collection from these authors is titled Anti-Hero Game. I love that Laurel was someone who refused to toe the line. Both Pax and Laurel had a lot of back and forth and it made for a wholly entertaining read. They try to resist one another for as long as they can, but, well, like the saying goes, resistance is futile, especially when a connection is as strong as theirs. As always, there are some unexpected twists, but then I should have known they were coming given that this is a Camaron and Michele-penned story. Now I can't help but wonder what awaits in book two! 4.5 stars go to Power Player. ♥

Read my reviews for the Power Chain series: