Review: Welcome to the Cameo Hotel by K.I. Lynn 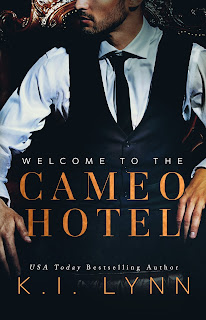 K.I. Lynn is one of those authors who makes it easy for me to say "yes" to. I've read nearly all of the stories she's written and co-written, and I've yet to come away from a title of hers disappointed. With her latest standalone, I had certain expectations based on the blurb, and while some of those expectations were, indeed, met, Lynn managed to surprise me with how sweet this new contemporary romance of hers was! Don't get me wrong; Welcome to the Cameo Hotel still had all the hot sex that I've come to expect with the author's writing. However, there was more sugary sweetness here than I was used to with her books, and that was most definitely not a bad thing. I love it when a go-to author has a trick up their sleeve that I don't see coming at all!

This full-length novel is the story of the twenty-five-year-old graduate student named Emma Addison who works at an upscale Boston hotel called the Cameo. She's got a bit of a thing for her boss, James, but they've limited it to friendly flirting for now. Emma's got a plan, after all, and pursuing anything more with James needs to come after she gets her master's degree and can finally leave the Cameo. Everything has been going according to plan...and then Gavin Grayson books a room. The thirty-five-year-old business executive is the vice president of the company works for and is on the fast track for more. He's moody, demanding, and downright rude. No one on the staff--including Emma--can stand him. But she's got a job to do, and Gavin? Well, he wants to do Emma.

I know not everyone likes guys who start off being asshats in romance novels, and while I would never tolerate any guy--fictional or otherwise--treating others in the jerky manner Gavin did, I confess that the guy did win me over. There was a whole lot more to him than meets the eye, but again, that doesn't excuse his abhorrent behavior in the first few chapters once he becomes a guest at the Cameo. He proves to be someone who starts off being in lust with Emma and then finds himself falling in love with her. He's also got a story to tell, and he turns out to be just who Emma needs in her life. I liked Emma, as well, though my heart broke for James, who I'm hoping gets his own happy ending even if it's just in a novella. Five stars go to Welcome to the Cameo Hotel. ♥