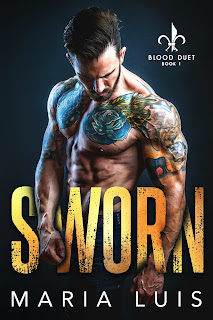 Well now. That was just. Wow. Give me a minute here. Okay, no. I've had a couple of hours already since I finished reading my first ever Maria Luis-penned novel and I'm still trying to wrap my head around everything that happened in Sworn, the first in her Blood duet. This may have been the first time I've read anything by Luis but it certainly won't be the last, and that's not just because that cliffhanger ending guarantees I'm going to be totally grabby hands once the conclusion to the duet, Defied, makes its presence known in my desperate tablet.

At the age of thirteen, Avery Washington witnesses something that destroys life as she knew it. Twelve years later, she reads Tarot cards on the streets of New Orleans, offering up fortunes to those who are willing to pay. It's on those streets that she meets a police sergeant by the name of Lincoln Asher. He's jaded and broody, and from the moment they meet, there's a connection that can't be ignored. But underneath that sexual tension and attraction is one jumbled up mess of half-truths and lies, not knowing which is which could destroy them both.

No spoilers. All I'm going to say is that ending still has me wishing I could make time speed up so that I could get all the answers I seek. Just when I thought I had everything figured out, all it takes is one not-so-teeny, tiny twist to knock me off the perch I was sitting on while patting myself on the shoulder for thinking I'd gotten it right. In one book, Luis hasn't only shown me what I've been missing by not having read anything by her before, but she's also given me one hell of a story I can't wait to continue reading more of! Five stars for Sworn. ♥