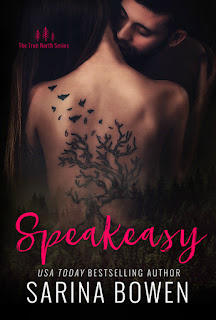 Man down! I'm officially a goner. I've just become one of those guys I used to mock—the kind who suddenly decide that spending an evening at home cuddling the girlfriend on the sofa is just as interesting as a night out with the guys. I'm whipped, apparently. And happy about it.

So this is how the other half lives.


We're back in Vermont with Sarina Bowen's True North series, and this time around, fans and readers aren't just hanging around with the Shipleys but with the Rossis as well! Yup, twenty-seven-year-old lawyer May Shipley gets her chance at true love and it's--surprise, surprise!--with thirty-two-year-old bar owner Alec Rossi. Now, this may sound like an unlikely pairing, not only because May happened to be in a relationship with her live-in girlfriend last we saw her in the series, but Alec doesn't exactly keep his disdain for the Shipleys in general as secret. So, is this a Romeo and Juliet-type scenario? Not really, especially since it isn't as if the Shipleys dislike the Rossis in any way, shape, or form. But then Alec's reputation for being somewhat of a manwhore, May still having feelings for her best friend, and both of them believing they're considered the family fuck-up, respectively? Well, all of that combined doesn't really bode well in terms of a future or acceptance. But these are mere casual, friends-with-bennies hookups. There is no risk of either one getting hurt or falling in love...right?

Confession time: the Rossi I was expecting to read more about first was Benito, but hey, I'll take Alec any day. He may seem like a totally easygoing guy without a care in the world, but there's depth to him the more layers are peeled away as the story progresses. He's got a truly big heart, and it's one that he doesn't just save for his family but also those who are nearest and dearest to him. Of course, being around May made it easier to see how much of a good guy he is. Sure, the guy had his slew of hookups prior to meeting May, but then I don't expect the characters that I read about to be perfect people. That would make them boring. I liked that he was flawed, as was May, and because there were parts of them that they didn't immediately expose to other people and all others saw were their failings, they seemed to be such a perfect fit. These two had far more in common than one would think, and I believe that's what allowed them to have a much better understanding and acceptance of one another. There wasn't this slew of expectations and demands coming from either of the two.

Aside from the romance--which I loved!--that was going on between Alec and May, I also appreciated how the series is about family. The Shipleys have been a favorite fictional family of mine since Bittersweet, and I'm not just talking about Griffin, May, and the twins, Daphne and Dylan. There's also the family matriarch, Ruth Shipley, and Grandpa Shipley, who tells it like it is and demands his slice of pie during family meals. Add to that everyone else who's come along and been taken in by the clan. I loved catching up with them and hope we've got a couple or so more stories to come from their end, including the Shipley cousins! Fingers crossed we'll get more of the other Rossi siblings who have yet to find love because they look to be an interesting bunch, though I confess I'm still not a fan of Uncle Otto. I do want to point out that each of the books in the series, including this newest one, CAN be read as a standalone. I'm just the kind of reader that needs to read books in a series in order, plus I'm a fan of True North, so go read them all! Five-plus snaps in the form of a big star for Speakeasy. ♥