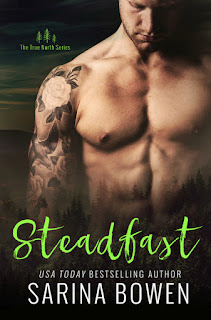 Heartbreak and addiction: two things that countless people never truly get over. You struggle to get through each day without the need--the craving--to have that one person who meant the world to you to still be by your side or to have one hit of your drug of choice or preferred alcoholic drink. In Steadfast, the second novel in bestselling author Sarina Bowen's Vermont-based True North series, Jude Nickel suffers from both. His addiction led to him getting charged and convicted on vehicular manslaughter, leading to the death of his then-girlfriend's brother. After three years in prison, going through drug rehabilitation, and having spent time working on a farm and orchard, twenty-three-year-old Jude returns to his hometown of Colebury, wanting nothing more than to earn a living and keep his head down. The last person he expects to see is his ex-girlfriend, Sophie Haines, believing she had gone off to study in Julliard. He already struggles with his addiction but his need for Sophie could be the one thing that will crush him.

On the day her brother died, Sophie Haines not only lost him but she lost her boyfriend as well. Jude Nickel is the only boy she's ever loved since she was seventeen, and his refusal to answer her letters broke what little was left of her heart. Life became even more intolerable in the home she once again shares with her parents and she bears with her father's terrible treatment of her because she can't leave her mother. So, twenty-two-year-old Sophie focuses on finishing her degree, getting a permanent position as a social worker in the local hospital, and not making her father angry. And then she spies the boy who stole her heart and continues to lay claim over it. Only Jude is no longer a boy. He still stirs in her feelings she knows will only bring them both trouble. But resisting the pull to Jude has always been an exercise in futility, and maybe with him back, she'll get answers to the questions that have plagued her for over three years. The odds were stacked against them before; now, those same odds may be all too insurmountable.

This book. It had me in tears at several points in the story--so not good when you're battling the flu--and had me happily squeeing in others. There's nothing glamorous about addiction and Sarina Bowen presents Jude's addiction in a painfully honest and gut-wrenching light. He knows what being an addict means and he recognizes the fact that he still craves that one hit that'll stop the twitch under his skin, but each and every single minute is a battle in an ongoing war for him. From the moment he was introduced in Bittersweet, I had a feeling Jude Nickel's story would not be an easy one to read, and it isn't. His journey is an ongoing and often difficult one and he doesn't like feeling needy, not even when the help is offered without any strings attached. He gets a second chance at life and he grabs it; however, with his second chance at love, he's far more hesitant, convincing himself that he doesn't deserve to be with someone like Sophie Haines and that being with him would taint her. Ah, Jude, you broke my heart time and again here.

I loved Sophie's perseverance, not just in keeping at Jude but in other things (which I will not go into since I suspect those could prove to be very spoilery--that's a word...I think) as well. She listens to both her heart and her head and that balance serves her quite well. Her friendship with Denny had me a bit wary in the beginning, but by the end of the story, my heart broke for Denny as well. Damn it, Sarina Bowen! Was it not enough that we had one man who we so desperately wanted a happily-ever-after? Did you have to give us another one? Gah! I know there's one more book that follows this one--Keepsake, due out in October--but that hopeful, wishful part of me has its fingers crossed that we'll get more because this series just has so many memorable supporting characters that are itching to get their stories told (stories which, naturally, I'm itching to read). I'm eagerly encouraging you to read Steadfast, a story of a love that's exactly that--steadfast--both for oneself and others and how it can overcome life's hurdles. Five-plus stars. ♥