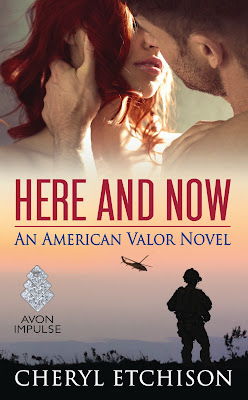 About Here and Now
The Rangers of the 1st/75th fight hard, train hard and play hard. They are physically strong and mentally tough, disciplined and courageous. But all their military training hasn't prepared them for falling in love.

Former Ranger Medic Lucky James feels right at home working long night shifts in the ER, but less so during the day, when his college classes are filled with flirtatious co-eds. When his 19-year-old chem lab partner shows up at his work with dinner for “her Lucky,” he quickly enlists the help of Rachel Dellinger, a nurse and fellow third shift vampire.

Rachel is a people pleaser at heart, but she’s finally decided enough is enough when it comes to her on-again, off-again boyfriend. When Lucky begs Rachel to help him ward off the advances of his teenager pursuer, she blackmails him into helping move her things out of the apartment she shared with her ex into a place all her own.

From there a friendship is born between two people just trying to make it through the night. Neither are living in the past or planning for the future. Until one day changes everything.

Add Here and Now on Goodreads.

An Excerpt from Here and Now
June 2006

Even though he knew it was coming, Lucky James flinched at the first volley of gunfire. He remained steady for the next two volleys, the loud crack giving way to the mournful sound of the bugle.

During his five years with the 75th Ranger Regiment, he’d never attended a stateside service for a fallen soldier. He’d stood at attention on a tarmac halfway around the world as the American flag was lowered to half-staff and “Taps” blared from loudspeakers. He’d carried flag-draped metal coffins holding the remains of his brothers-in-arms up the ramp of the C-130 that would deliver them home. He’d knelt beside many of those coffins, placed his hand atop them, silently begging forgiveness for failing them. After all, as a Ranger medic, his number one priority was to return his fellow soldiers home to their loved ones safe and sound. Not in a box. Never in a box.

When the bugler finished, the honor guard lifted the American flag from Ethan Dellinger’s casket and began the ceremonial folding. Everyone watched in silence as the soldiers worked in tandem, pulling the fabric taught, smoothing each crease, making each fold with precision. It had been years since he’d last seen Ethan; his last memories of him were as a chatty middle schooler who invited himself to shoot hoops with Lucky at a nearby playground one day. Over the course of the next few years, Ethan would show up out of the blue and follow Lucky around as he worked on his car, mowed the yard, whatever he was doing. Right up until the day Lucky left for basic training.

To be completely honest, Lucky hadn’t given much thought to Ethan during the past five years. After all, he was just a kid he once knew. He hadn’t even known Ethan had joined the army immediately following his high school graduation. Only after arriving home on leave the day before had Lucky learned from his father that “the youngest Dellinger boy” had been killed by a roadside bomb in Iraq.

His immediate family assembled only feet away from his casket with the remaining friends and family forming a semicircle around the grave site. From where Lucky stood at the back, he could see each of their faces. Ethan’s mother and father sat side by side on small folding chairs with elderly relatives, grandparents perhaps, seated next to them. The youngest of four children, Ethan’s immediate family was large to begin with, and when in-laws, nieces, and nephews were thrown into the mix, it grew to massive proportions.

Despite the large gathering, his eyes were drawn to Ethan’s sister, Rachel. She stood out even among her own siblings with her fiery red hair and bright blue eyes.
She and Lucky were of the same age, had attended the same schools from the time Lucky and his father moved to Durant, Oklahoma, in the middle of seventh grade. In all that time, he’d never spoken more to her than the occasional hello, goodbye, or single-word answer. And for as long as he could remember, while she’d never paid any mind to him, she’d always had his attention, despite the fact they traveled in different social circles.

But what stood out about her today he found upsetting. There she was, surrounded by all these people, all family or friends of her brother, and she stood completely alone. With her arms wrapped tight around her middle, Rachel comforted herself at a time when no one else seemed to notice or care.

It took every bit of self-restraint for him to not make a scene, march over to where she stood, and pull her into his arms. He was on the verge of saying to hell with being polite when the service ended and the crowd began to disperse. Everyone except him. He remained right where he stood, watching Rachel as she walked over to Ethan’s casket, pressed a kiss to her fingertips, and laid her hand upon the polished wood.

He had only taken a few steps in her direction when her head lifted and she caught sight of him. Much to his surprise, she stepped away from Ethan’s casket and walked toward him. Her blue eyes were red and swollen, her face tearstained.

“Rachel,” he began the moment she was in earshot. “I’m very sorry about Ethan. He was a great—”

Before he could finish his condolences, her palm met his cheek with a resounding crack.

“How dare you come here,” she said bitterly.

The tears fell freely down her face now. Her hands shook and her body vibrated with restrained fury.

He apologized a second time for reasons unknown even to him. But judging from the expression on her face and the hurt in her eyes, the words needed to be said.

“This is your fault,” she said, pointing to the hole where her brother’s casket would be lowered and the adjacent pile of red dirt that would bury him deep beneath the earth’s surface. “Ethan idolized you. Wanted to be you. He joined the army in hopes of following in your footsteps. Except he didn’t score high enough to be a medic. Wasn’t fit enough to be a Ranger. I hope you’re happy.”

Stunned into silence, he could do little more than watch as Rachel Dellinger turned her back on him and walked away. 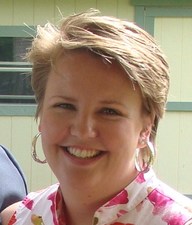 Cheryl Etchison graduated from the University of Oklahoma's School of Journalism and began her career as an oil and gas reporter for a weekly business paper. Bored to tears and broke as hell, it wasn't long before she jumped ship and headed for the promise land of public relations. But that was a nearly a lifetime ago and she's traded in reporting the facts for making it all up as she goes. Currently, she lives in Austin, Texas with her husband and three girls.