Review: The Arrangement by Felice Stevens 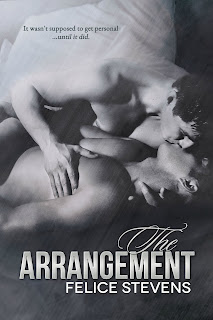 His life was a riot of threads, the younger years creating a spider web spun out to include Jackson, his business, and the carefully drawn persona he allowed the public to see. He couldn't possibly add another circle to include someone like Reed, who'd rightfully demand and deserve all of him. His past and his present. His heart.

The Arrangement is the latest M/M contemporary romance standalone novel from Felice Stevens and it took me on an emotional, heartrending ride that has me feeling that this is the author at her very best. It's an unconventional love story between thirty-two-year-old public relations company owner Carter Haywood and twenty-seven-year-old graduate student and bartender Reed Kincaide. Carter and Reed lead complicated lives, so when one hook-up has Carter returning a month later for more, he proposes a simple monthly arrangement that would have them spending one weekend together at a hotel. No strings, no fuss, no emotions--nothing more than an uncomplicated weekend of sex. But feelings are bound to get involved and when the arrangement begins to feel more like a relationship, what once was uncomplicated becomes confusingly far more complex than either man had signed up for. They've both kept personal details out of their hook-ups and they have things to hide--Carter's responsibility to his ten-year-old younger half-brother Jackson who has special needs and Reed's attention deficit hyperactivity disorder (ADHD) and anxiety. They're entangled, and now must decide if they want to remain tied to each other or if it's time to cut the strings--and their losses--and to find a new set of arrangements...with someone else.

The arrangement that Carter and Reed have agreed to may seem simple enough but it belies the very complicated things they have going on when they're not together. Feelings were bound to develop between the two, especially since Reed wants to push the envelop a bit and do things outside the four walls of the hotel room they share once a month. Carter finds it difficult to say "no" to the man he can't get enough of. The connection was there from the beginning and when feelings are thrown into the mix, you'd think that they'd be itching to learn more about each other. The thing is, Carter is reluctant to tell Reed anything about Jackson and Reed has already had one relationship end because of his ADHD and anxiety, so he's not itching to inform Carter his diagnoses. Their love story has them taking stuck in neutral at times, moving forward once in a while and then backing up even farther later on. They've got dark pasts which are the culprits in making them think they aren't worthy of being loved or accepted, so thank goodness for the wiser, more mature people around them--Reed's father and his boss and Carter's neighbor--to dole out advice and get these two heading in the right direction. Their love story plus Carter's relationship with Jackson made for an endearing and equally hot and heartfelt read. Five-plus stars for The Arrangement. ♥

Purchase The Arrangement on Amazon | Kobo.