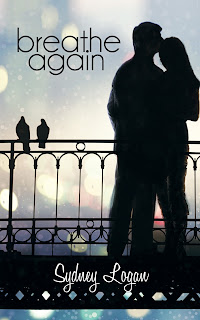 
"Are we crazy?" he asks, his voice just a whisper.

I don't reply. I don't have to. Because we both know the answer.

We're crazy about each other.

Breathe Again is my second Sydney Logan read and it's a reminder of how gifted this woman is when it comes weaving a story that tugs at my heartstrings, as well as a nudge that I've got some of her other books sitting in my tablet, waiting to be read. She's put together such a unique story, one that isn't overly long but not too short and packed it with a tale of tragedy and triumph and how two people are finally able to grab on to the second chance at life and love that fate has gifted them with. There were smiles and sniffles but overall, this book left me with a feeling of hope and inspiration and it's one that I happily recommend.

Twenty-one-year-old college senior Carrie Malone is grateful for her waitressing job at a local diner. She's able to earn the money necessary to finish her degree and her boss, co-workers, and regular customers have been a great source of support ever since she moved from her remote hometown to the city. She misses her late father, is estranged from her mother, and ended a relationship with a cheating ex. She prefers to keep things simple, but there's nothing simple about her last minute, late night customer who leaves behind his Rolex as a tip. When Carrie sees him again, it's just as he's about to jump over a bridge...

Twenty-four-year-old tech executive and multi-millionaire Josh Bennett has lost his will to live, choosing to simply end his agony by stepping off a bridge. But then he's rescued by the waitress he met in a diner and he hesitates in his plan long enough for Carrie Malone to offer him sympathy and solace. There's something about her that seems to ease his pain, allowing him to actually take in a breath...and then another...and another. With her, Josh feels like there's hope that'll everything will, at the very least, be bearable. Can two shattered souls inspire each other to become whole again and find love in the process?

I loved this book and the message that I shared. Both Carrie and Josh know what it's like to lose someone you love and who gave your life meaning and inspiration. Their love story is unconventional and just when you think you know what's going to happen next, Sydney Logan surprises you by putting her own creative spin to make it especially extraordinary. I was so fully invested in Carrie and Josh, my heart squeezing in my chest with every challenge they had to face and overcome. These two were strong enough on their own, but together, they were invincible. I'm highly encouraging you to purchase Breathe Again. Five-plus stars. ♥