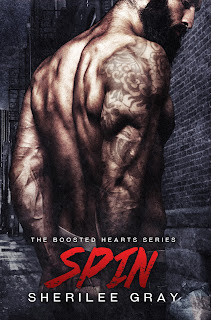 Sherilee Gray serves up a sequel that lived up to every single one of my hopes and expectations for it. The Boosted Hearts series got off to a fabulous start with Swerve, the story of Hugh Colton and Shay Freestone, so I wanted nothing more than for the second book to be as good, if not better. Spin met the challenge and slapped it silly, giving readers a tale that had equal measures of lightheartedness and angst as two people forced into a situation not of their own doing go above and beyond for their respective brothers. We met twenty-eight-year-old mechanic Joe Colton in the first book and I was excited for the guy to finally get his own story told, and here he shares it twenty-four-year-old plumber Darcey Conners. For all intents and purposes, Joe and Darcey shouldn't want to have anything to do with each other, but from the minute their paths are forced to cross, their fates collide. Two car thieves bound by familial ties with no end in sight may have to choose between love and family before everything spins out of control.

Taking on the burden that his older brother Hugh was saddled with and his best friend Adam Grady was helping out with was something Joe simply had to do. The debt their good-for-nothing father left them with has meant of years of forced servitude to the head of a criminal enterprise that required them to boost cars and then make enough changes to make the stolen automobiles difficult to trace. What was three is now down to one and Joe has no intention of letting his brother nor his best friend learn the truth. The only reason he was able to help Hugh be set free from his obligation was Joe saving the criminal boss's niece from ending up in jail. This was the very same niece that was sabotaging each of their efforts to get one step closer to finally clearing their debt and the same one who kissed him with abandon only to run off afterward. Now, she's constantly in the shadows, watching him. Joe isn't sure what Darcey Conners is up to, but he wants answers. He hates her and what she's done to them. If only he didn't want her so badly...

There's a much deeper story to both Darcey and Joe. They're both car thieves and they're equally loyal and loving to their brothers, but they're stuck in a situation that doesn't have a predetermined finish line, leaving them spinning their wheels with the brakes engaged, leading them nowhere. But actually, their situation does lead them somewhere, and that's to each other, whether they like it or not. I loved Darcey's tenacity and the love she had for her younger brother Noah. Whatever harm she may have been doing to the Colton brothers was simply due to the pressure she was facing if she wanted to set both Noah and herself free. Then there's dear Joe who captured my heart after what he did for Hugh. Gah! Brotherly love at its finest. He prefers to see the best in people unless they give him reason to see them in a far darker light. He truly is a good man who deserved a happy ending of his own. The tension between Adam Grady and Lucy Colton has me excited for Slide, but for now, I shall continue to bask in my Spin high. Five stars! ♥

Read my reviews for the Boosted Hearts series: