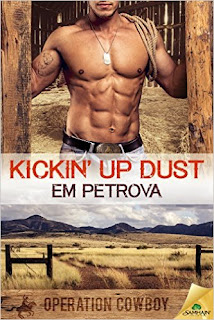 Note: This ARC was provided by Samhain Publishing in exchange for an honest review.

Kickin' Up Dust is the Operation Cowboy series starter and my very first Em Petrova read. This is a falling-for-year-best-friend's-sibling romance with some angst to it. Brodie Bell and his three closest friends have served their time in the military and are finally making their way back to their hometown of Los Vista, Texas. When they enlisted and left Los Vista, there were five of them, but now all Brodie has left of his best friend Matt Pope are his personal effects after he was killed in action. There are two things Brodie takes note of right away: first, the town they left has been flattened to the ground by a devastating act of nature, forcing majority of the townsfolk to uproot and move to nearby towns, and second, Matt's sister Danica has gone from baby sister to babe in the five years they haven't seen each other. With Brodie and Danica working together to get both their family ranches back in the black and to help the town they both love back on its feet in order to encourage residents to return, any hopes of keeping his distance from his best friend's gorgeous sister are quickly fading. He's fighting a losing war because Danica wants Brodie as much as he wants her, but can she convince him that being together wouldn't dishonor Matt in any way?

Danica and Brodie's burgeoning and hesitant romance is set in a somewhat desolate backdrop, one that mingles between the immense loss of the town they once new and the far greater loss of the man they both loved. Both their families are facing struggles, but Danica's family has the death of Matt added on top, leaving her parents unable to really think of moving forward. Taking care of their respective ranches are on the shoulders of Danica and Brodie, and having the two ranches working together makes it impossible for either one of them to stay away for too long from the other. While they both have the memory of Matt holding them back, it's Brodie who feels far more guilty about even fantasizing about Danica, what more pursuing the young woman he once thought of as like his little sister. Once they do get together, there's a lot of sex that goes on, but as much as they explore the more physical aspect of their non-relationship, these two so needed to work on their communication skills because there were a lot of assumptions being made, especially on Brodie's part. I'm interested to see the town of Los Vista slowly but surely being rebuilt so I'm looking forward to reading the rest of this new series. I'm giving Kickin' Up Dust four stars. ♥