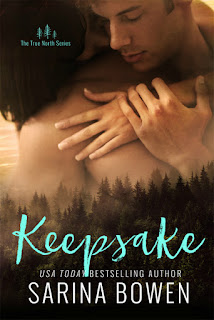 “I heard about all the miracles, and I was bummed to have missed out on all the action. But here’s the funny thing—now I live in the most miraculous place in the world. When you and I go to work later, it’s to ripe apples practically falling off the trees. There’ll be milk in my coffee, and someone offering me seconds and thirds at breakfast. This is the land of milk and maple syrup.” I glanced down to find Lark listening to me with a soft expression on her face, and I was never more certain that God’s earth was a special place. “Everywhere I look I see miracles,” I finished.


Oh. Wow. This series just keeps surprising me in all the best ways possible and it's simply gotten better every time Sarina Bowen has added a new story to the collection. I know this was originally supposed to be a trilogy, but there are more tales from Shipley Farm in Tuxbury, Vermont that need to be told. And I'm not just saying this because I am the book whore that I am and desperately craving more books than I'm humanly capable of reading. The three tales that have been told (so far--fingers crossed!) are distinct yet equally endearing. I seriously need a farmer in my life, for as long as they come close to the ones found in True North, but Zachariah Holtz is in a class all his own.

After a harrowing kidnapping in Guatemala, twenty-four-year-old Lark Wainright has decided that a couple of months watching her parents tiptoe around her in their home in Boston is more than she can take. She heads to her best friend May's family farm tucked in Vermont to work alongside the Shipleys in their apple orchard. Maybe the change in scenery can help her escape the nightmares that continue to plague her. Unfortunately, those remain in full force, but Lark is surprised to find comfort in the soothing voice and soft touch of Zach Holtz, an unofficial member of the family, and a young man who's had his very own harrowing experience that he's survived.

At twenty-three, Zach Holtz has only experienced true freedom for over the past four years. A former member of a polygamist cult, he was ex-communicated at nineteen, leaving him to hitchhike his way to a couple that ran away from the group years before. Having found a home and family with the Shipleys afterwards was a blessing, but there are times that Zach still feels as if he has to earn his place, unsure if he's going to be asked to leave or thrown out like before. When Lark Wainright arrives at the farm, she and Zach unexpectedly form a kinship that transitions into something far more intimate. With all of Lark's unresolved issues, will she and Zach survive past this season?

I adored every single bit of this story of survival and triumph over adversity. While Lark may be more worldly compared to Zach, they're kindred spirits who have endured unspeakable things. The thing is, they both need to give voice to those experiences in order to no longer have them trapped within. They have their fears and apprehensions, and in order to combat the doubts, they need to be able to talk about what happened to them. I so felt for Lark because she was desperately trying to not give anyone anything to worry about, needing to show the rest of the world she was okay...but she wasn't. Her journey wasn't easy, but it was honest and ultimately inspiring.

Zach. Le sigh. This young man had my heart in his hands from the start and his story was one that I was dying to find out from the moment he was introduced in Bittersweet. At nineteen, he was at a point that he had to leave behind everything that he had known to venture into the absolute unknown, and that's what made him such a poignant and moving main character. There was one particular point in the story where his actions and the reaction of Griffin and May Shipley brought me to tears. It was impossible to not fall in love with Zach, but then it's been impossible to not fall in love with this series and its characters. Five-plus stars for Keepsake. Times a hundred. ♥