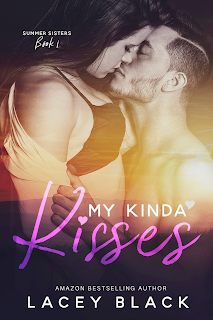 My Kinda Kisses is the first novel in the brand new series from author Lacey Black entitled Summer Sisters. Book one is about Jaime Summer, who was left at the altar by her fiance and now refuses to enter into a committed relationship for a good, long while. She returns to her hometown of Jupiter Bay, Virginia and just when she's positive she can stick to her new game plan, Ryan Elson enters the picture. He's immediately smitten by Jaime and though she tries to resist his charms, there's something about Ryan that calls to her. But one broken heart is more than enough to have Jaime wary and making sure that she isn't jumping into something that could very well lead to yet another painful end. But Ryan is persistent and tries to reassure Jaime that his intentions are pure and that he would never knowingly hurt her. Will Ryan be able to help Jaime heal or will Jaime lose her chance at true love?

This was my second Lacey Black read and I enjoyed the chemistry between the main characters, Ryan and Jaime. Ryan was such a great guy, more than willing to put in the time and not push Jaime too much. He wanted to earn her love and trust. I understood where Jaime was coming from and I would have probably wanted to keep my distance as well, especially with a guy like Ryan--a guy you could totally fall in love with and if it ends, it could be the kind of heartache you could never come back from. Both Ryan and Jaime were easy to like and to relate to, but they also had a good group of supporting characters surrounding them, especially when it came to Jaime's family, led by her off-beat grandparents who were a hoot. I couldn't help but wonder what I would have done if I had grandparents like her, but these two sure provided lots of hilarity to the story. I'm giving My Kinda Kisses four stars. ♥