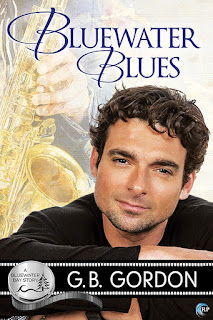 
Bluewater Bay is one of my favorite continuing series, with its variety of voices and stories courtesy of different authors participating while all sharing one setting--Bluewater Bay, Washington--and at least one of the main characters having some connection, whether direct or otherwise, to the television series being shot on location. The fifteenth addition to the series is Bluewater Bay, and it's the second contribution of author G.B. Gordon to the collection. It's the story of Jack Daley, who works the local convenience store along with his older sister Margaret, who is autistic. Jack gave up his music career, even selling his treasured saxophone, in order to leave behind their past--especially their father--and to protect Margaret. Their circumstances don't allow Jack to have much of a personal life, but when Bluewater Bay costume designer Mark Keao, who is also autistic, enters the store, Jack takes notice. They connect, but Jack can't afford anything more than casual, and what's going on between him and Mark has never, ever felt casual.

I was immediately drawn by two of the characters in the story having autism. Margaret and Mark are in different places on the spectrum, but Jack having grown up with an autistic sister has given him a better perspective as far as his being in a relationship with Mark is concerned. Let it be said that the main point of contention and the greatest source of conflict between these two in the story has nothing to do with Mark's autism, which I greatly appreciated. There's a twist of sorts involving why Jack distances himself later on, and it added an interesting complexity to this love story and highlights how devoted Jack is to Margaret. That devotion isn't one-sided either, and I couldn't help but go "Awww!" when it came to Margaret's own version of matchmaking. Both Jack and Mark need to communicate better--Jack with Mark and Mark with the people around him. I get, though, their reasons for not sharing--Jack his situation and Mark his autism--and these two had their sweet--and of course, steamy--moments. Bluewater Blues gets 4.5 stars. ♥