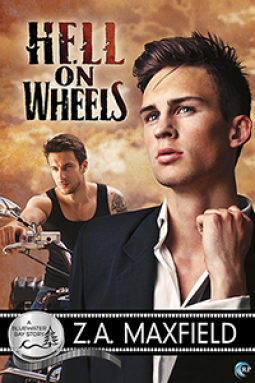 Hell on Wheels by Z.A. Maxfield is the third book in the multi-authored Bluewater Bay M/M series. For this third installment, we have Nash Holly and Spencer Kepler-Constantine. Nash manages his family-owned car repair and maintenance shop and is Bluewater Bay native. Spencer is part of the cast of Wolf's Landing, the famous television series being filmed in town. These two lost souls don't realize they're just waiting to find one another when their paths cross on a dark, foggy road.

Nash Holly is there whenever something needs to be fixed, whether it be a car or a family problem. The needs of others, especially his family's, have always come first but he's never complained. He knows he's not as smart as his twin brother or their younger sister nor is he as creative as his inventor father. He simply wants to be there, to be needed. When he meets a good looking actor with an English accent on the side of the road, he does what he does best and that's to try and make things better.

Spencer Kepler-Constantine is going through a very painful and public divorce after his soon-to-be ex-husband got a well-known actress pregnant. Even months after the separation, he's still trying to deal with everything that went wrong but can't seem to release all the anger he's feeling. Working on a popular show helps him focus on something other than his marital woes but meeting a hot and helpful mechanic makes him think that maybe it's time to finally stop moping and move forward.

Nash and Spencer become friends who just happen to be enjoying some great benefits on the side. They listen to one another and offer advice whenever the situation warrants it. They're both undergoing changes, what with Nash having to confront his sister's demands for independence and his father's suddenly active love life and Spencer dealing with his divorce and the non-stop intrusion of the media and paparazzi anything that involves him, his ex, his ex's pregnant lover, and his now-rumored lover.

As they become even closer, Spencer's ex suddenly decides he wants another chance and makes a grand gesture that has the public buzzing. Spencer needs to make up his mind if he wants to make things work with his ex or if what he really wants is someone else. Nash needs to re-assess his life in light of the developments that are happening all around him and if he's ready to have someone else take care of him instead of the other way around.

I liked Nash and Spencer's story, especially because there wasn't any insta-love involved. Their relationship progressed rather well and there really was a friendship that was established between them. Nash's family and Spencer's PA and bodyguard were great supporting characters because they provided the necessary insight for the two leads. The epilogue had me smiling like a loon and I was more than satisfied with how everything wrapped up. Hell on Wheels gets four stars! ♥

Grab a copy of Hell on Wheels on Amazon | Barnes & Noble | Kobo.