Review: "As Long As You Love Me" by Ann Aguirre 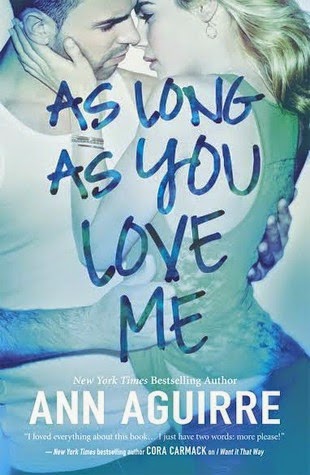 As Long As You Love Me is the second book in the 2B trilogy by Ann Aguirre and moves the spotlight to Lauren Barrett and Rob Conrad, the best friend and older brother of book one's female lead character, Nadia Conrad, respectively. This was a story of two people whose paths initially crossed because of their connection to Nadia and who harbored feelings that they both believe were unrequited for a number of years. When they begin spending more time together, they decide to act upon their feelings but they both have their own issues that they need to deal with if their relationship has any chance of surviving.

Lauren Barrett flunks out of school and returns to her small hometown to live with her mom and go after a degree she's actually interested in. She's never been fully comfortable in social settings but spent several years pretending that she was, reinventing herself in the hopes to overcome her anxieties. While she's no innocent virgin, there is one particular guy she's never lost her teenage crush on--her best friend's one and only brother. The thing is, he's always looked at and treated her like his other younger sister and that makes Lauren think that's all he'll ever see her as.

Rob Conrad has always believed that he'll never measure up to his sister Nadia. His parents have made him feel as if he's not as intellectually gifted as her and other people see him that way as well. His personal insecurities have forced him to limit his options, thinking that he's only good at manual labor such as construction work. The one person who appears to truly believe in more than his supposed potential is his sister's best friend. She tells him that he's already more than what he sees in the mirror or how others perceive him to be.

As much as I enjoyed the first book, I wasn't as enthused with this sequel, and it may have to do with the fact that I didn't really like Lauren in I Want It That Way. The story was interesting but there were moments that I found myself hesitant to actually believe that Rob had this crush on Lauren ever since she was eighteen and the fact that Lauren had all these anxieties yet didn't seem to have a problem engaging in sex acts with other guys while in school and that she's so desperate to have sex with Rob. I couldn't really muster up the enthusiasm to cheer these two on. :(

I also thought Lauren wasn't much of a best friend towards Nadia, considering she trusted Angus Starr (from book one) with her decision to return to her hometown before informing Nadia who she shared a room with. There was also her having more of a trusting relationship with Rob and the other supporting female characters her than she appeared to have with someone who was supposedly her best friend for years. Rob was such a nice guy and his insecurities made me want him to succeed and find his happily-ever-after...just not with Lauren, but oh well.

I truly wanted to like As Long As You Love Me as much as I did I Want It That Way but I already had a problem with Lauren then and it got worse now. I liked Rob as well as a few other supporting characters and I did enjoy the idea of two people suffering through their anxieties and insecurities are able to fit well together, filling those perceived gaps that the other has and providing the support and balance needed. I still am looking forward to reading the third book because mysterious Max finally gets his story told. I'll be giving this second installment in the series three out of five stars.

Check out As Long As You Love Me on Amazon | Barnes & Noble | Kobo.