Review: "Finish What We Started" by Amylynn Bright 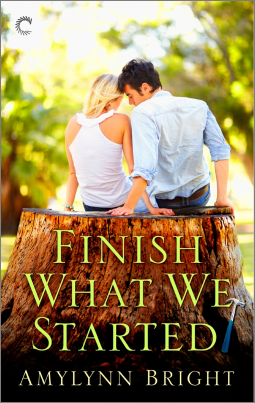 Finish What We Started by Amylynn Bright is a contemporary romance about second chances and how forgiveness isn't merely saying you're sorry but truly letting go off the pain and anger from the past in order to fully pursue a better future together. Five years after their six-month romance suddenly crashed and burned, Lee and Candace are unexpectedly thrown together. Seeing one another brings back memories, both the good and the bad, and it appears as if the feelings they once never truly died.

Five years ago, Lee Bennett and Candace Claesson had the kind of relationship that was best described as "whirlwind" but they were very much in love and seemed to be headed for their very own "happily ever after". When Candace was accepted at a veterinary school in Scotland, it appeared as if everything she had worked hard for was finally coming to fruition. Unfortunately, Lee was experiencing his own life-changing event and needed Candace by his side, something she wasn't able to give him and he angrily ended things.

Five years later, the hurtful words Lee flung her way still haunt Candace and the fact that Candace left when he needed her most still lingers in Lee's mind. But now she's back in their hometown and they need to work together on the new veterinary clinic Candace's family is having built and that Lee's construction company is handling. There's awkwardness and bitterness in the beginning but both also have feelings of guilt and maybe something that's still lingering from their time together years prior.

Even as Lee and Candace rekindle their romance, there are obviously issues that they need to discuss seriously instead of glossing over. After all, it's too easy to say that everything's okay and then when something comes along to test their second chance at love, the anger and frustration of the past cause feelings of distrust and apprehension. Should they have left things the way they were or is theirs the kind of love that deserves to be fought for?

This story was sweet and I'm a sucker for anything with dogs or cats or any sort of cuddly animal in it. You could place the blame on both Lee and Candace with as far as the demise of their relationship five years ago. I get why they were both hurt and angry about the choices that were made by either party. Their respective families and friends brought the humor and insight that made this book an overall good read. I'm giving Finish What We Started four out of five stars. ♥

Pre-order a copy of Finish What We Started from Amazon | Barnes & Noble | Kobo.