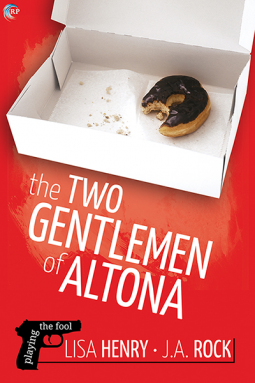 The Two Gentlemen of Altona is the first book in the Playing the Fool series by Lisa Henry and J.A. Rock. The expected end of one of my all-time favorite book series, Cut & Run by Abigail Roux (and Madeleine Urban for the first four books), has me searching high and low for something new to occupy my reading obsessed mind. When I came across The Two Gentlemen of Altona on NetGalley, I immediately found myself curious and the synopsis had me requesting to read and review it, and I'm glad I did! ^.^

Ryan "Mac" McGuinness is a special agent for the Federal Bureau of Investigation and is quite at his job. When he finds out that someone who agreed to testify against a mob boss has been shot and killed by that very same mob boss and that he has a potential witness to the said murder, he's hoping that everything he's worked for on the case won't be for naught. Unfortunately, his would-be witness decides that calling the police was the extent of his civil duty and runs, making Mac look like a fool to everyone in the FBI.

Henry Page isn't really Henry Page. He goes by several names and could probably be called a "con artist" but he prefers "grifter". After witnessing a mob boss kill his right-hand man in cold blood, Henry does the right thing by alerting the authorities but doesn't want to stick around to testify. However, the FBI agent he conned into believing he was part of the police has other plans and chases Henry down. When both their lives are put into danger, Henry puts his trust in Mac, hoping that they'll both come out of this alive.

Mac is forced to take Henry into hiding over at his family's cabin in Altona and while he can't stand that Henry talks his ear off and has done illegal things, Mac can't help but notice how attractive he is. On the other hand, Henry seems to enjoy pissing Mac off and he hasn't quite gotten a handle on all the lying. Still, beneath Mac's gruff exterior, Henry notices that Mac is rather good looking. These two probably wish they were rid of one another but there's something pulling them to each other as well.

I enjoyed reading this first book to what looks like a very promising series. The fact that Mac and Henry don't have much in common makes their dynamic an interesting one, especially since these would-be allies are so adversarial at times. By the time I finished reading the book, I wanted to know more about Mac and Henry and to see what would happen next because that ending left me desperately needing the next book. Damn you, cliffhangers!!! But we bookaholics keep coming back for more, don't we? Le sigh.

Let me make it clear that, while I did decide to check this out because of the highly anticipated end to one of my favorite book series, this book stands on its own. I'm not going to compare the two because I'm so absolutely in love with one and I'm still in the "getting to know you" stage with the other. The fact that I liked this first book and am looking forward to the rest gives me hope that I'll be falling in love with this series soon enough. The Two Gentlemen of Altona gets 4.5 stars! ♥